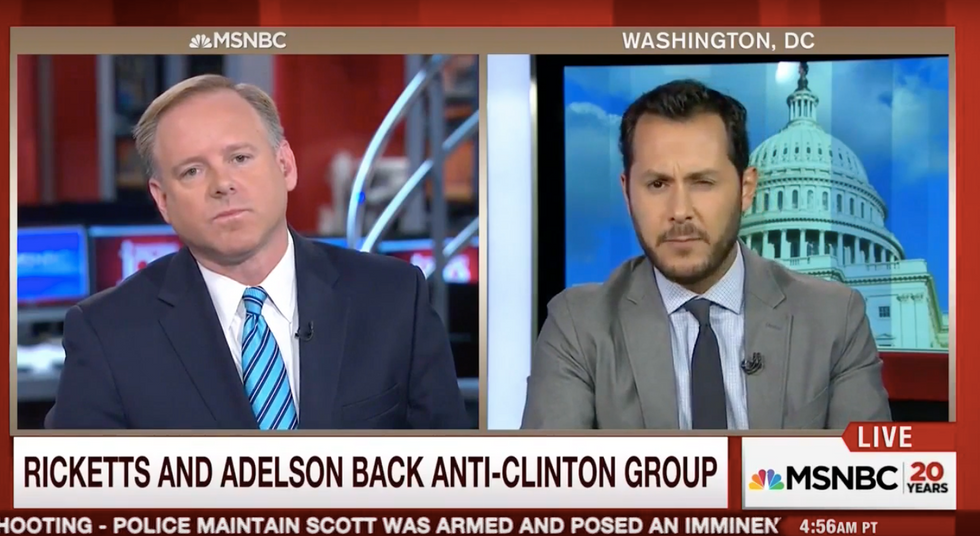 On Friday, Brian Baker -- president of a super PAC that supports Republican presidential nominee Donald Trump -- appeared on MSNBC's Morning Joe and told such flagrant untruths that pundit Sam Stein could only laugh at the absurdity.

Mediaite's Tommy Christopher reported that Stein confronted Baker with the Committee for a Responsible Federal Budget's prediction that Trump's economic policies, if implemented, would cause the budget deficit to swell to $5.3 trillion by 2026. Democratic nominee Hillary Clinton's economic plans could produce a net deficit of $200 billion.

"As someone who just admitted that you're very concerned about debt and the deficit," Stein said, "surely you must be petrified by the fact that Donald Trump would increase it by $5.3 trillion over ten years, right?"

"Well, I think that's a great question," Baker said, "but the Committee for a Responsible Budget doesn't assume any economic growth. Trump is talking about creating jobs."

"Alright," Stein replied skeptically, shaking his head and chuckling at the idea.

"Once you put people back to work, once you have high-paying jobs, more jobs," Baker said, "the government will collect more in revenue and that's how you balance the budget. Hillary Clinton won't do any of that."

It is worth pointing out that, yes, the $200 billion deficit that Clinton's budget plan would create is a lot of money. A trillion, however, is a thousand billions. So, 5.3 trillion is nearly five and a half thousand billions as opposed to Clinton's 200.

Former Tennessee Democratic Rep. Harold Ford Jr. pointed out, "The last time the budget was balanced, it was balanced by a Clinton, just for the record."