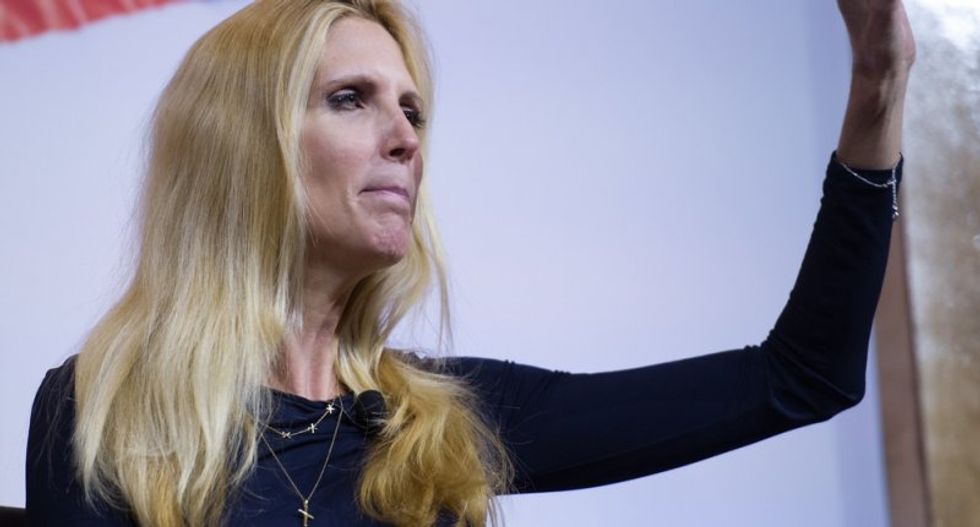 Professional troll, Ann Coulter fell out of the news for about a week, so it's must have been time for her to try to shock as many people as possible with the most inflammatory and insensitive remarks she can muster.

In a Thursday appearance on Sean Hannity's radio show, Coulter called former Miss Universe Alicia Machado nothing more than a "Hispanic mattress girl." The reference is to Columbia University student Emma Sulkowicz, who carried her dorm mattress through campus after being raped in her dorm room. Sulkowicz explained that her protest represented the burden she carried since Columbia University refused to suspend her alleged rapist, forcing her to face him almost daily.

"And it's pretty spin gruel when this latest one, the Hispanic mattress girl, Alicia Machado," Coulter began. "Now today she's saying, 'Oh I'm not talking about Trump anymore.' Their big heroine of the —"

"Yes, of what a brute Donald Trump is," Coulter continued. She then went on to cite the conspiracy theories about Machado and her past.

"That's the poster child for our immigration policy," Coulter continued. "They looked and they looked, they've had a year. What are we going to bring in? We need you know the most sympathetic case and that's the one they come up with. It's Alicia Machado. The new Hispanic mattress girl. She was just made a citizen in August."

Hannity asked what she meant by "mattress girl," because he hadn't heard the reference before.

That's when Coulter describes the raped student. "Oh, remember the whole hysteria over mattress girl at Columbia? I just mean she's – it's like an It Girl, except it's mattress girl."

"Oh good grief," Hannity said, knowing he was about to get flack for her comment. "I am not responsible if this is obscene in some way and I don't even know what you're referring -- I'm just asking?"

"Have you been in a coma for the last two years?" Coulter said about Hannity's lack of knowledge about the news. "There was that woman doing an art project walking around with a mattress on her back." Coulter went on to say that the rape was false.

Listen to the whole thing below via Media Matters: