‘Are you offended as a white man?’ All hell breaks loose when Fox guest mentions ‘white privilege’ 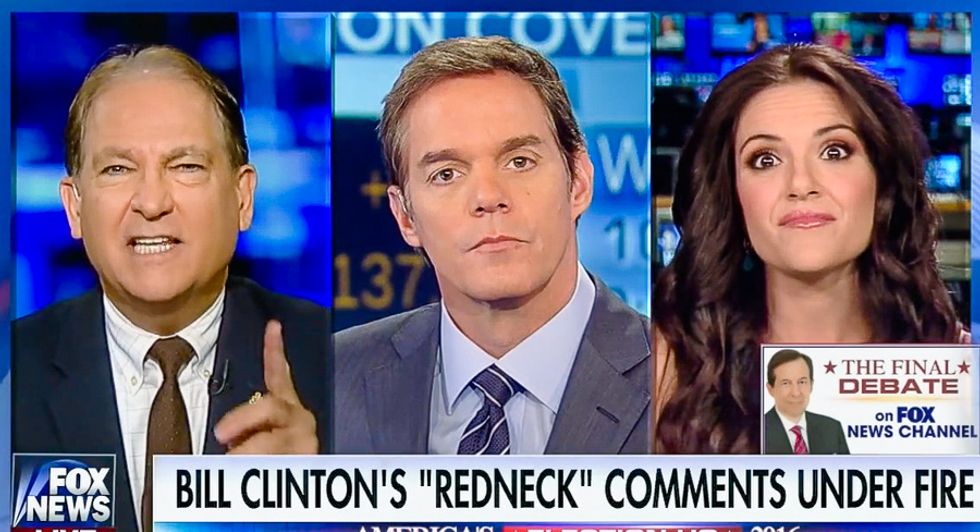 Fox News host Bill Hemmer reacted with shock on Wednesday when liberal commentator Nomiki Konst pointed out the "white privilege" of Republican strategist Brad Blakeman, who was complaining about racism against white people.

The argument began over former President Bill Clinton's comments this week about why he understood the mindset of Donald Trump's core supporters.

“Look man, the other guy’s base is what I grew up in,” Clinton said, referring to his Arkansas childhood. “You know, I’m basically your standard redneck.”

On Wednesday, Fox's Hemmer suggested that Blakeman should be offended by Clinton's remarks.

"It's worse than being called a deplorable!" Blakeman agreed. "Redneck has a racist tone. Bill Clinton knows that. He admits that he grew up in that era of racism where he knows exactly what redneck means, especially beyond southern borders."

Hemmer complained that the former president was attacking "all you bad folks who are watching Fox News."

But Konst attempted to de-escalate the outrage by reminding the two men that Bill Clinton was not talking about "every Fox News watcher," but those people "who want to go back to a time where the white man really was more successful than pretty much every other demographic."

"This is a racist remark!" Blakeman exclaimed.

"He grew up in the deep South," Konst replied. "He's Bubba! His nickname is Bubba. If there's anybody in the race that understands the deep South, it's Bill Clinton."

"I'm a Trump supporter and I'm not a redneck!" Blakeman shouted.

"Oh, I'm sorry," Konst snapped sarcastically. "Are you hurt, are you offended as a white man who comes from privilege? Alright, okay, enough with the privilege. You know, you guys have been struggling so hard your entire life, all of history. Let's get real."

"I work for everything I've got!" Blakeman griped.

"Is that where this is going? Wow!" Hemmer said. "You just dropped the white privilege bomb here. Defend that."

"Since when has anything in society been racist against white men?" Konst asked. "Name some instances."

After a moment of silence, Blakeman ignored the question and accused Konst of "pitting people against each other."

"You are the one that said it's racist," Konst pointed out.