CNN's John King batters Corey Lewandowski over 'rigging' talk: How do Republicans ever get elected? 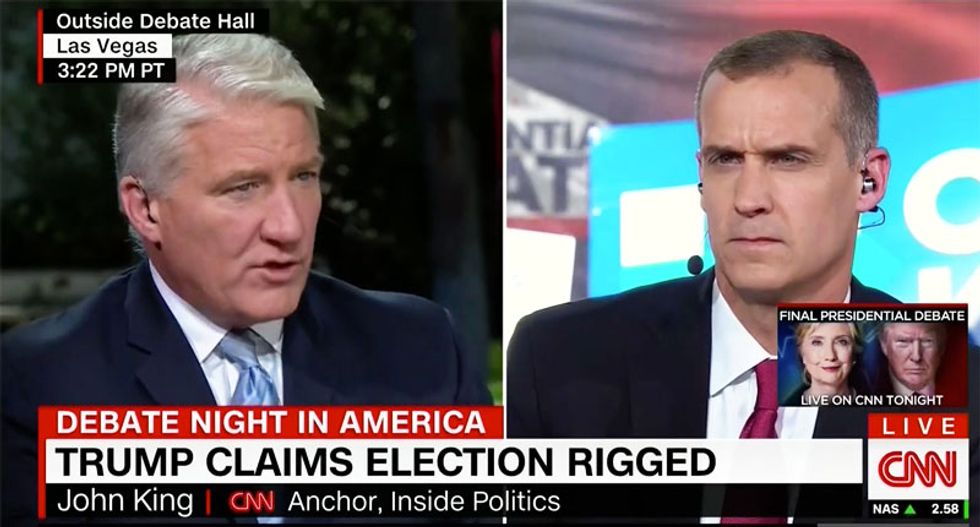 CNN Political Analyst John King delivered a blistering rebuttal to the assembled Donald Trump advocates on a panel Tuesday afternoon who continued to back the GOP presidential nominee's claim that the election is "rigged."

With Trump backers Corey Lewandowski and Scottie Nell Hughes stating Democrats contested the 2000 George W. Bush victory in Florida over voting fraud, King shot down the idea that elections are rigged at the state level by citing tremendous gains by GOP nominees over the past 10 years.

"Look, we're complaining about two different things," King began. "If this comes down to 537 votes in Florida like 2000, then Donald Trump or Hillary Clinton has every right to ask the state for a recount, to ask the state to look at the machines, to have their people look at a bipartisan process and look at the records. If you believe you've been wronged, you take it to court. They would have every right to do that."

"Everybody should step back and relax," he continued. "But we didn't relax, we had a country that was torn up. But after the Supreme Court, Al Gore did man up, and he did do the right thing. A lot of Democrats were saying, 'Sir, do you want us to surround the Supreme Court? Do you want us to bring people to Washington?' and Al Gore said 'No! I think I was robbed but this is how it works.'"

King then turned to more recent elections, pointing out gains made at the state level by Republicans.

"If you rig an election, you rig it to win, right?," he lectured. "Have the Republicans rigged all the elections over the past ten years except for the presidential elections?"