CNN’s Navarro: Trump is ‘driving drunk into a big beautiful brick wall’ with his 'disgusting' campaign 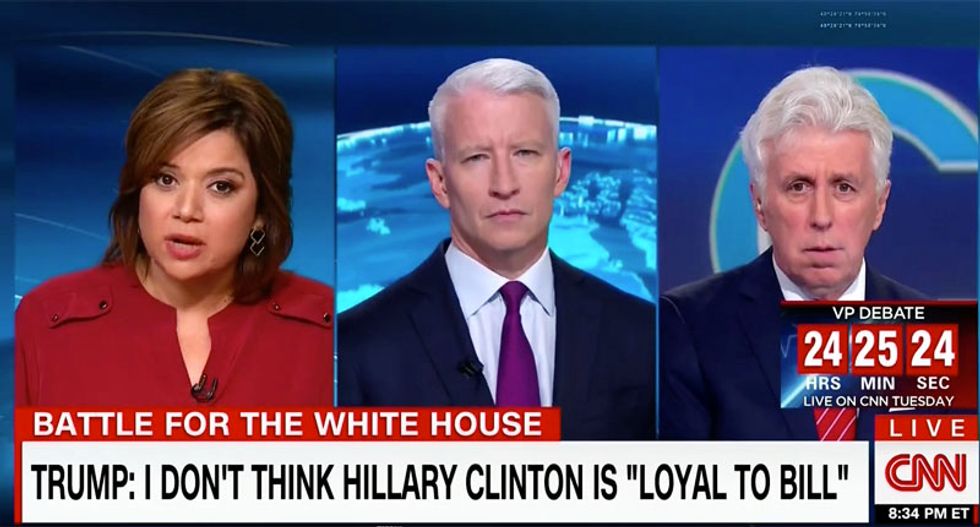 Conservative consultant and CNN contributor Ana Navarro -- who has been highly critical of GOP presidential nominee for weeks for his reckless rhetoric -- has turned her fire of Trump's advocates saying the candidate has turned into a drunk driver and none of his people are willing to take away the keys and save his campaign.

Appearing on Anderson Cooper 360, Navarro began by pointing out that there are few days left before the elections and that Trump has become" unhinged."

'What I can tell you based on the last week, Donald Trump has become unhinged, completely unglued and plans to take us way down the drain into the gutter in the next month and a week," she began. "I think it is shameful. I think it is disgusting, and I think his surrogates are adding fuel to the fire, finding ways of defending these allegations and these charges and these totally made up things he's coming up with, and need to put a stop to it."

"When you see somebody you love, when you see somebody you care for driving erratically, driving drunk, you take the keys away. You don't let that person continue to drive erratically, drive right into a brick wall," she continued. "Donald Trump is driving smack into a big, beautiful brick wall, and it is driving the entire Republican Party down."

After calling on her friends in the Republican Party to rein Trump in, Navarro took some scathing shots at the nominee.

"Look, man, if you dodged the draft four times, you really should not wage attacks against political -- against prisoners of war or against people who served in the war," she sternly advised. "You shouldn't call them not strong enough. If you had your share of well-publicized infidelities, you really shouldn't be attacking other people about their marriage challenges. If you look like you haven't seen the inside of a gym in at least three years, maybe, just maybe, you should restrain yourself from calling a beauty queen 'fat' and 'Miss Piggy.'"