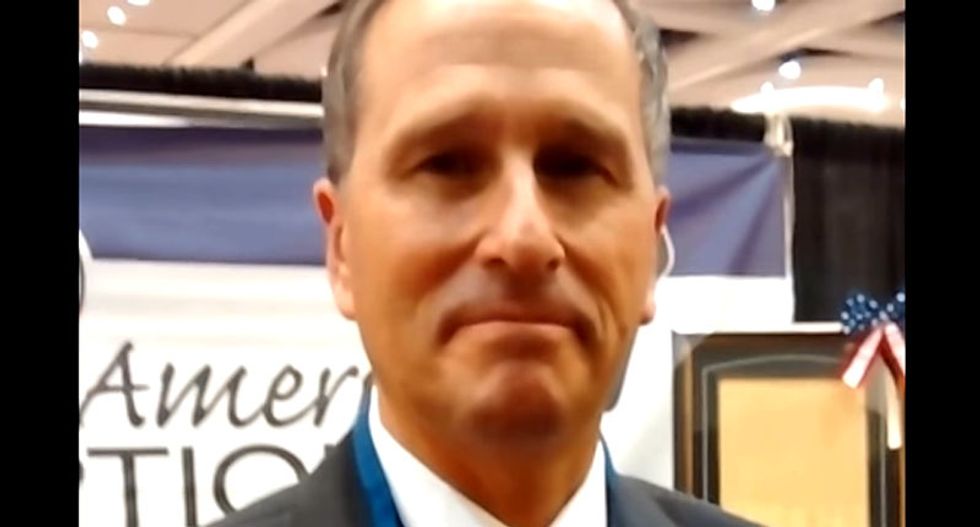 The campaign website for state Rep. Tim Leonard of Evergreen portrays him as a successful businessman and devoted father who’s dedicated to “[r]aising healthy, holy, and happy children.” But what his site doesn’t say is that Leonard repeatedly has disregarded a judge’s order in his divorce case – so much so that what has been ruled his contempt of court may land him in jail before year’s end.

Leonard, a real estate broker, was appointed to his House District 25 seat last January, replacing then-Rep. Jon Keyser, who resigned to run for the Republican nomination for U.S. Senate. Leonard is vying to win his first full-term in the seat in November.

He and his ex-wife, Monica Leonard, divorced in 2013 after 20 years of marriage. They have six kids. One is a recent college graduate, another is in college, and the other four are under the age of 18.

As part of their divorce settlement, Monica Leonard was granted sole decision-making about the minor children’s education. She has complained to family court that Leonard repeatedly has disregarded that order.

During a hearing in Jefferson County District Court on Sept. 29th, a magistrate scolded Leonard for repeatedly shrugging off the judge’s order and interfering with his ex-wife’s educational decisions.

This time, it could cost him his freedom.

Magistrate Marianne Marshall Tims found Leonard in contempt of court on two charges related to educational decision-making. She said she intends to enter a punitive sanction, which she told him could be a jail sentence of up to six months. But the hearing adjourned after 5 p.m. in the business day, after the bailiff had ended the shift.

“If it was earlier, Mr. Leonard, you need to know that a sheriff would be coming to take you into custody,” the magistrate said, according to a transcript of the hearing obtained by The Colorado Independent this week.

The transcript shows that Leonard repeatedly has attempted, sometimes successfully, to make educational decisions for his children that conflicted with decisions made by his ex-wife. According to his own testimony, he was found in contempt of court in September 2014 for trying to opt out one of the children from a particular state standardized test. The transcript shows that the school was aware of the court order and disregarded his instructions, so the child took the test.

One of the two latest contempt findings against Leonard was for his attempt to opt another child out of a federal standardized test. Leonard told the magistrate that the federal test was “educationally insignificant,” although he did not explain what led him to that conclusion.

“He’s not qualified to make that determination,” the magistrate said in her ruling.

Monica Leonard is the only parent “that would have the ability to opt [the child] out,” Magistrate Tims added. “He doesn’t have the authority to do that regardless of how insignificant he has decided testing will be… He has previously been held in contempt for exactly what was done here today. He finds that this meant different kid, different test. That’s contrary to what the Court finds today.”

Magistrate Tims said it was “mind blowing to me” that Leonard figured the court order from September 2014 had to do only with one kind of testing and for only one child.

“[T]he Court will enter a punitive sanction and I can tell you Mr. Leonard, you are not going to like it,” she said.

Her other contempt finding was for Leonard’s refusal to allow one of the younger children to use an iPad at school. The devices were given to every student in that child’s class. Because Leonard forbade his child from using it, the teacher had to single out that child for supplemental work in lieu of using the iPad.

Leonard testified that he does not have internet access at his home to be used by a child of that age.

The magistrate ruled that he may restrict the iPad’s use at his home, but not ignore the decision about education made by his ex-wife for the child to use the device at school.

“I don’t know if we are going to go through all of the kids and all of the issues before they grow up and reach the age of maturity, but at this rate it sure seems like we are,” an apparently exasperated magistrate said.

After a marriage that spanned two decades, Monica Leonard was granted an annulment by the Catholic Church in June. Her sister, Mary Miller, toldThe Independent that Monica Leonard homeschooled the children for 20 years, but after the divorce put four of them in public schools – a decision that her ex-husband has objected to, preferring they attend an online school at home instead.

Leonard is a co-founder of Golden View Classical Academy in Golden, a public charter school whose website touts a curriculum aimed “to recover lost tools of learning in order to cultivate wise and virtuous men and women who will be responsible citizens of our republic.”

Since 2012, when Monica Leonard first sought the divorce, Miller estimates Leonard has filed more than 80 motions against his ex-wife on a variety of issues.

Monica Leonard told the magistrate that “I filed for divorce because of his controlling and manipulative behavior. It’s four years later and he is still trying to control me in every fashion possible.” Their youngest is now nine, and to go through another ten years of this will be “hell,” she said.

For his part, Leonard said his family has run into a few problems with public schooling. He found it objectionable that a school would teach on iPads, and pointed out that the school’s permission form required approval from both parents. “Like all parents, I am quite restrictive about screen time with my kids,” especially one so young, he wrote.

“If the magistrate decides on jail time for this, she would be clearly overreaching as this is not a ‘contempt’ worthy cause,” he added.

On the testing issue, he wrote, “Like many other parents, I requested opting our son out of the [federal] PARCC Exam last spring. This followed on the heels of the State Board granting Jeffco Public School District the waiver they requested to not be penalized for lack of student participation. Likewise, my child’s school was granted a waiver the prior year to not administer the PARCC test.

“Again, this would be a major overreach by the magistrate to hold me in contempt and warrant jail time on an issue so many clearly determine is not necessary for a child’s education,” he wrote.

Leonard noted that any order by the magistrate “is appealable to a judge.”

“It’s always unfortunate, that during these divorce court battles, common sense goes out the window and the kids suffer,” he wrote. “This has not reduced the sadness of our situation and the trauma for our children. Clearly there is a problem with the system.”

Leonard will be sentenced for his punitive sanctions on Dec. 9 at 1:30 p.m.

By Marianne Goodland, The Colorado Independent