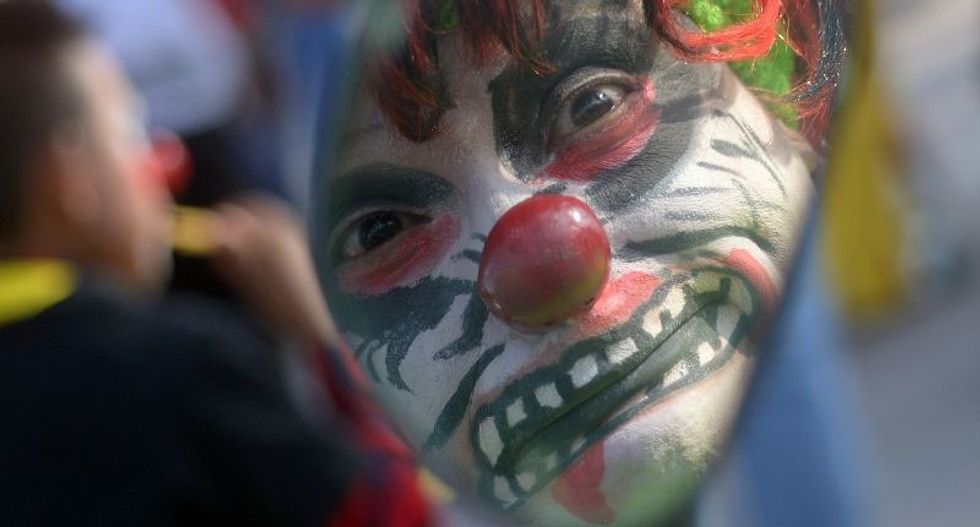 Spooky clown sightings have been reported in more than a dozen states with authorities forced to react to stories of clowns lurking outside schools or businesses, armed clowns driving around in a van or clowns prowling neighborhoods (AFP Photo/Marvin Recinos)

A series of creepy clown sightings across the United States has caused a wave of hysteria, forcing police and schools to scramble to contain spreading jitters, and even the White House to weigh in.

The spooky sightings were first reported in August in South Carolina when police were called in to investigate what turned out to be bogus accounts of men dressed as clowns trying to lure children into the woods.

But similar sightings have since been reported in more than a dozen states with authorities forced to react to stories of clowns lurking outside schools or businesses, armed clowns driving around in a van or clowns prowling neighborhoods.

One school in Ohio even shut down over security concerns after a woman said she was attacked by a man dressed as a clown. And hundreds of students at Penn State University, in Pennsylvania, went on the hunt for jesters Tuesday night after reports of creepy clown sightings.

Coming just weeks before Halloween, when millions of children across the United States don costumes and go house-to-house trick-or-treating, the frenzy has become a social media sensation with the hashtag #IfISeeAClown trending on twitter and the @SpookyClowns account attracting 186,000 followers.

Meanwhile Instagram has exploded with posts of people dressed in clown costumes staring menacingly at the camera or photos of clowns appealing for understanding or offering free hugs.

The hysteria spread further this week with officials in California and Oregon forced to respond to numerous clown sightings -- largely considered to be hoaxes -- and social media threats against schools, also considered to be pranks.

Sergeant Juan Briseno, of the Los Angeles County Sheriff's Department, told AFP that patrols outside schools had been increased in the city of Carson, south of downtown Los Angeles, following a threatening message on Twitter about clowns targeting an area high school.

"I have sent our school deputy to go speak with every school within our jurisdiction and make them aware of the situation," Briseno said.

The city of Lancaster, north of Los Angeles, was also swept into the frenzy this week after men wearing clown masks -- and possibly carrying kitchen knives -- were seen walking around in what police said was an attempt to frighten people.

At one school in Oregon, officials sent an email to worried parents this week reassuring them after a rumor spread about clowns planning to harm local students.

"This rumor has surfaced across the country, mostly due to people reposting or sharing previous (social media) posts," the email states.

"We are working with our partners at Portland police to monitor this issue."

The White House weighed in on the phenomenon this week saying the sinister sightings that have led to about a dozen arrests should be taken seriously and that the FBI and the Department of Homeland Security had been consulted on how to handle the scare.

"Obviously, this is a situation that local law enforcement authorities take quite seriously and they should carefully and thoroughly review, you know, perceived threats to the safety of the community and they should do so prudently," said White House spokesman Josh Earnest.

Experts said the epidemic of real or imagined sightings and ensuing hysteria could be explained by "coulrophobia", a long-documented phenomenon which increased in the wake of the 1986 Stephen King novel "It" featuring a malevolent clown, later turned into a hit movie.

"The last number that I have heard is that one in almost 10 people report a phobia of clowns," said Matthew Lorber, director of the child and adolescent psychiatry program at Lenox Hill Hospital in New York.

"For kids, to not be able to see somebody's real face is what makes the clown so scary," he added.

Lorber said social media was feeding the current scare, which he warned could cause lasting trauma and panic attacks among younger children.

"Dangerous fads tend to catch and social media really fuels them," he said.

"The idea of scaring people with clowns and posting their reactions online is garnering so much attention that it's happening more and more."

Ringling Bros. and Barnum & Bailey, which runs a clown school, views the creepy frenzy as no joking matter.

"It is troubling because it's a distraction for our clowns who just want to make people laugh and smile," it said in a statement carried by US media.

But King, whose cult thriller gave a generation the heebie jeebies, has decided to laugh it off.

"Hey, guys, time to cool the clown hysteria -- most of em are good, cheer up the kiddies, make people laugh," the novelist tweeted on Monday.