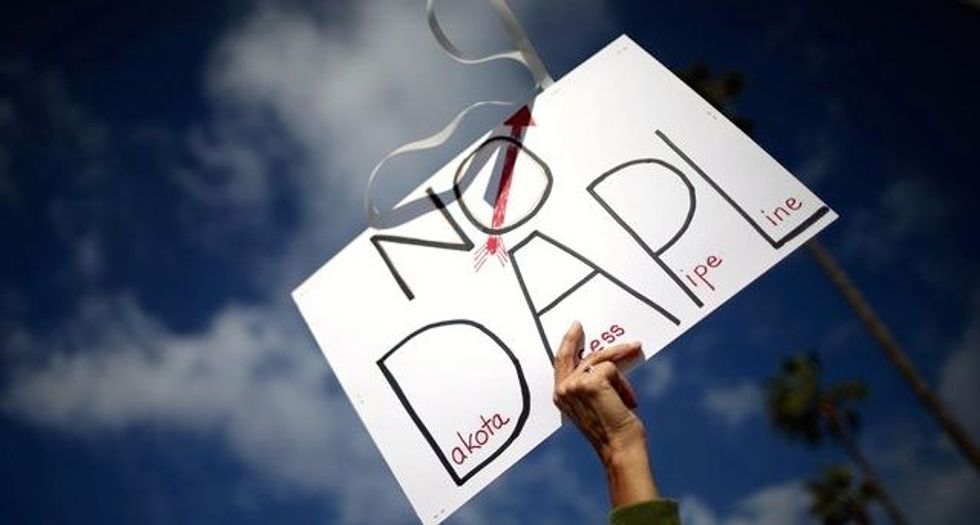 Native American protesters on Monday occupied privately owned land in North Dakota in the path of the proposed Dakota Access Pipeline, claiming they were the land's rightful owners under an 1851 treaty with the U.S. government.

The move is significant because the company building the 1,100-mile (1,886-km) oil pipeline, Dallas-based Energy Transfer Partners LP, has bought tracts of land and relied on eminent domain to clear a route for the line across four states from North Dakota to Illinois.

Video posted on social media showed police officers using pepper spray to try to disperse dozens of protesters, who chanted, beat drums and set up a makeshift camp near the town of Cannon Ball in southern North Dakota, where the $3.8 billion pipeline would be buried underneath the Missouri River.

The area is near the reservation of the Standing Rock Sioux tribe. It was not immediately known who owns the occupied land.

In September, the U.S. government halted construction on part of the line. The Standing Rock Sioux and environmental activists have said further construction would damage historical tribal sacred sites and spills would foul drinking water.

Since then, opponents have pressured the government to reroute construction. The current route runs within half a mile of the reservation.

Protesters on Monday said the land in question was theirs under the Fort Laramie Treaty of 1851, which was signed by eight tribes and the U.S. government. Over the last century, tribes have challenged this treaty and others like it in court for not being honored or for taking their land.

“We have never ceded this land. If Dakota Access Pipeline can go through and claim eminent domain on landowners and Native peoples on their own land, then we as sovereign nations can then declare eminent domain on our own aboriginal homeland," Joye Braun of the Indigenous Environmental Network said in a prepared statement.

"The best way to resolve this is to reroute this pipeline and for the (Obama) administration to not give an easement to build it near our sacred land," Archambault said in an interview.

In filings with federal regulators, the company said at one point it considered running the line far north of the reservation and close to Bismarck, the state capital.