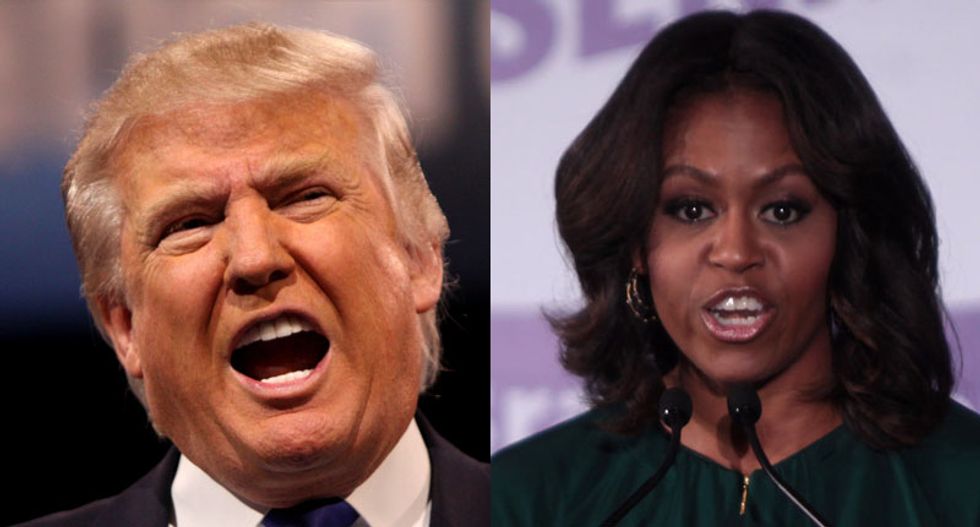 On Friday, Republican presidential nominee Donald Trump used an out-of-context line from a 2007 campaign speech by Michelle Obama to attack both her and Democratic nominee Hillary Clinton.

According to TheHill.com, Trump was speaking at a rally in North Carolina when he made the remarks.

"I see how much his wife likes Hillary, but wasn’t she the one that started the statement: 'If you can't take care of your home, you can’t take care of the White House or the country?'"

The notoriously thin-skinned candidate was responding to the First Lady's remarks from Thursday in which she described him as out-of-touch with the struggles of most Americans.

“Perhaps living life high up in a tower in a world of exclusive clubs, measuring success by wins and losses, the number of zeros in your bank account. Perhaps you just develop a different set of values,” she said at a campaign rally in Phoenix, Arizona. “Maybe with so little exposure to people who are different than you, it becomes easy to take advantage of those who are down on their luck.”

In 2007, when Obama was campaigning for her husband the Illinois senator, PolitiFact reported, she made a speech in Iowa in which she discussed the challenges of balancing two careers, two daughters and politics.

"One of the things, the important aspects of this race, is role modeling what good families should look like. And my view is that if you can't run your own house, you certainly can't run the White House. Can't do it," she said. "So, so we've adjusted our schedules to make sure that our girls are first, so while he's traveling around, I do day trips."

Obama continued, "They just know that I was at home to tuck them in at night, and it keeps them grounded, and, and children, the children in our country have to know that they come first. And our girls do, and that's why we're doing this. We're in this race for not just our children, but all of our children."

Chicago Sun-Times reporter Jennifer Hunter wrote at the time that the comments could perhaps be seen as a "swipe at the Clintons," which was enough for Matt Drudge of the Drudge Report, who blasted the story out to his credulous readers as a sign of a blood feud between the Obama family and the Clintons.

"Barack Obama rejected that interpretation," PolitiFact said, "saying in a conference call with reporters that 'there was no reference beyond her point that we have had an administration that talks a lot about family values but doesn’t follow through.'"