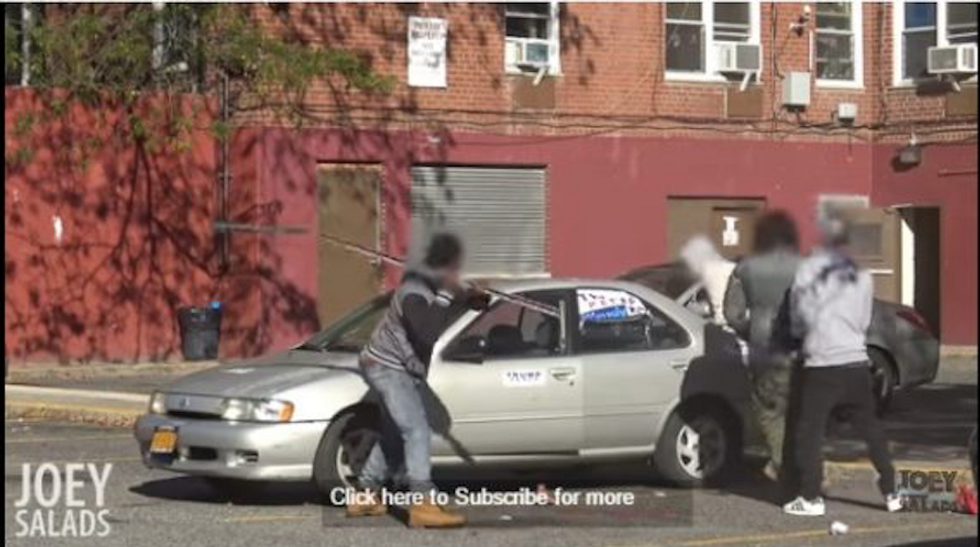 Conservative news sites and bloggers have fallen for a staged video of African-American men vandalizing a "Trump car," the latest in a string of incidents in which right-wing outrage media has fallen for a prank story.

Mediaite reported Thursday that the Drudge Report ran a featured story earlier in the week that included a video of young black men vandalizing a car with pro-Trump campaign stickers.

The story was picked up by multiple right-wing sites like Gateway Pundit, World Net Daily and Western Journalism.

The video makers, said Gateway Pundit -- aka gay conservative blogger Jim Hoft -- "parked a car with Trump stickers in a 'black neighborhood' to see what happens. It took 30 minutes before the Democrats started looting the car and beating out the windows."

Within 24 hours, the video was revealed to be a hoax and YouTube prankster Joey Salads released an apology video for any harm the staged car demolition may have done. Salads is known for his racially dubious "social experiment" videos in which he stages situations that reinforce negative stereotypes of nonwhites.

Debunker Ethan Klein has since leaked video of Salads and the "vandals" hanging out at the video set on clearly friendly terms. Klein has debunked other Salads "experiments" in the past.

This is the third time in a week that Drudge, Hoft and other conservatives have fallen for fake news stories. A Twitter user named @randygdug posted a joke tweet that said, "i love working at the post office in Columbus, Ohio and ripping up absentee ballots that vote for trump."

Drudge, Rush Limbaugh and other right-wing alarmists read the tweet and interpreted it as evidence of real live vote tampering and spread the word that an Ohio postal worker was trying to throw the election in Clinton's favor. Hoft and others even went so far as to call for an investigation by the Ohio state government.

Comedian Bob Whismore posted an image of himself surrounded by what appeared to be seven phony driver's licenses. "New fakes are in," he wrote, "ready to make Hillary president."

The IDs were just photoshops of Whismore's real driver's license, but the Trump campaign's social media department snatched up the tweet as evidence of vote fraud and ran with it.

It is apparently a feature of the conservative movement that is adherents are easy marks. Last year a study found that right-leaning rubes had donated more than 50 million dollars to shady political funds.

The bulk of that money, said Right Wing News, gets “siphoned off to vendors, wasted, and just plain old pocketed by people in these PACs.”