Fox Obamacare report goes south fast : 'Treat me like a guest instead of your punching opponent' 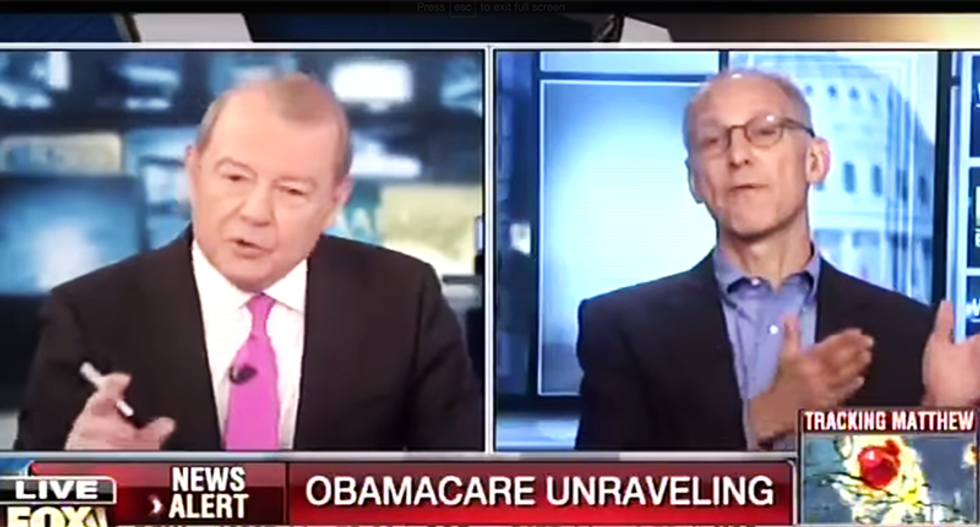 If there's one thing that Republicans love to do it's trash President Obama's signature healthcare legislation, lovingly referred to as Obamacare. Particularly, after President Bill Clinton's gaffe talking about the parts of the law that he believes should be tweaked. Fox Business News pounced on it and launched into yet another takedown of what a disaster they think Obamacare is in an interview with the bill's architect Dr. Ezekiel Emanuel.

After reading a letter from a viewer who admits he isn't on Obamacare but that his premiums have gone up, Dr. Emanuel admitted that writing a law to help ensure 310 million people get covered, some people are going to have some problems. That's simply the law of statistics.

"We should also not have amnesia," Dr. Emanuel explained. "The situation before the Affordable care act had 50 million people uninsured."

At that point Fox Business News host Stuart Varney tried to interrupt Dr. Emanuel to cut him off.

Dr. Emanuel wasn't having it. "Would you, would you let me-"

"Look, I'm running this," Varney said like an ill-tempered brat on a playground not getting his way.

"Would you let me finish?" Dr. Emanuel asked. "Would you treat me like a guest instead of your punching opponent so I can be here and respond?"

"Chris? Is it? Are you apologizing?" Varney asked, bizarrely

But Varney tried to cut in again and talk over him. He read another letter from Mark in Arizona, who wanted to know why his premiums went up.

Dr. Emanuel explained the inflation rate has gone down but he said that many corporations are choosing to use the excuse of Obamacare to jack up premiums.

The whole thing was a disaster - watch the video below: