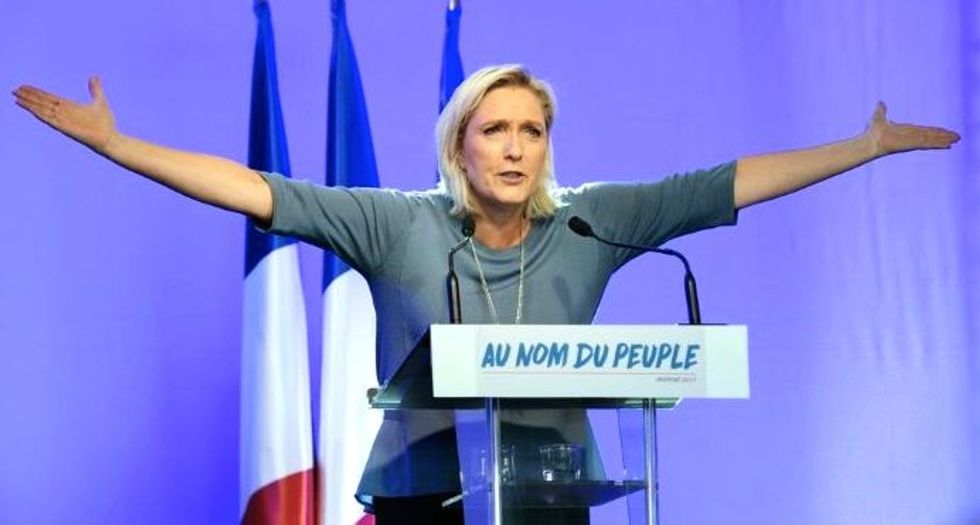 From Brexit to the rise of Donald Trump, 2016 has been a humbling year for political forecasters. In France, could they be wrong again in writing off the far-right's prospects in next year's presidential election?

Marine Le Pen, the leader of France's National Front, certainly thinks so. She sees signs of encouragement from Britain, the United States and across Europe where mass migration, inequality and terrorism have eroded old certainties.

Conventional wisdom holds that she will make it into the second round of the election next April and then lose, when centre-right and left-wing voters will back a more mainstream candidate.

This would be a similar outcome to the 2002 election when her estranged father caused a political earthquake in European politics by reaching the second round -- where he was defeated by Jacques Chirac.

"There's a global awakening," Le Pen told reporters last month in the southern town of Frejus where supporters flocked to hear her bashing the EU, the euro and immigration.

In echoes of Trump's "Make America Great Again" or Brexit's "Take Control" slogans, she declared that "the time of the nation state has come again."

But while undisciplined Trump seems to revel in his troublemaker credentials, Le Pen has been studiously avoiding controversy as part of a drive to boost her credibility.

Six months before the French go to the polls, the 48-year-old is on a mission to win over the last of the anti-FN diehards, canvassing pensioners, teachers and other groups that have long regarded the party as untouchable.

"Those who think there is no chance (of Le Pen winning) and that there is no threat from the far-right are greatly mistaken," Jean-Marie Le Guen, the junior minister for parliamentary relations, warned recently.

"She is absolutely convinced she can win," one of Le Pen's advisors told AFP.

Even if Le Pen wins the first round, the lingering stigma around the FN is predicted to trip her up, with her second-round rival, tipped to be former prime minister Alain Juppe, expected to easily defeat her.

A survey by the BVA polling group last month showed Juppe beating her by 66-34 percent.

The race would be a closer affair however if Le Pen came face-to-face with former president Nicolas Sarkozy, Juppe's main challenger for the right-wing nomination in a November primary.

The same BVA survey showed a much tighter race. Sarkozy, a far more polarising figure than Juppe, would win by a smaller margin of 56-44 percent in the final duel, it said.

Convinced she can close the gap, Le Pen is continuing her drive to sanitise the FN's image that has paid off since she took over the leadership from her father in 2011.

Gone is the anti-Semitism and overt race-baiting of the past -- her rhetoric on Muslims and migrants is softer yet still effective in a country and a continent battling an unprecedented terror threat and record new arrivals.

But she cannot escape her father's embarrassing comments that the Nazi gas chambers are a "detail of history" and Marine's approach to the migrant crisis -- she has said "we should just feed them and send them back where they came from" -- has attracted scorn.

In France's depressed north, voters in former leftist bastions have decamped in droves to the protectionist FN, out of frustration with the government's failure to halt factory closures.

The FN, which has blamed the EU for much of France's ills and pushed for a "Frexit" referendum on France's EU membership, reaped the spoils of the Socialists' demise in last year's regional elections, topping the poll with 28 percent.

- Bigger than the party -

A year later, Le Pen is campaigning mainly on her own brand, which has now outgrown that of the National Front.

Jean-Yves Camus, a researcher who specialises in far-right movements, said her trump card was that she had never been in government.

"It conceals many aspects in her programme that lack credibility," he said.

Le Pen herself says it means she does not "have to repay any favours."

But her lack of potential allies is also her Achilles heel in a country where elections always go to a run-off.

In the past six decades, no party has ever garnered more than 50 percent alone in the first round, said Joel Gombin, a political analyst and FN specialist, who called a Le Pen win "a very unlikely scenario."

Kyiv (Ukraine) (AFP) - The EU on Friday joined the G7 in agreeing a cap on the price of Russian oil to starve the Kremlin of resources for its Ukraine war, as Vladimir Putin said strikes on Ukraine's infrastructure were "inevitable".

The price cap of $60 per barrel, previously agreed on a political level with the United States and the G7 group of wealthy democracies, will come into effect with an EU embargo on Russian crude oil from Monday.