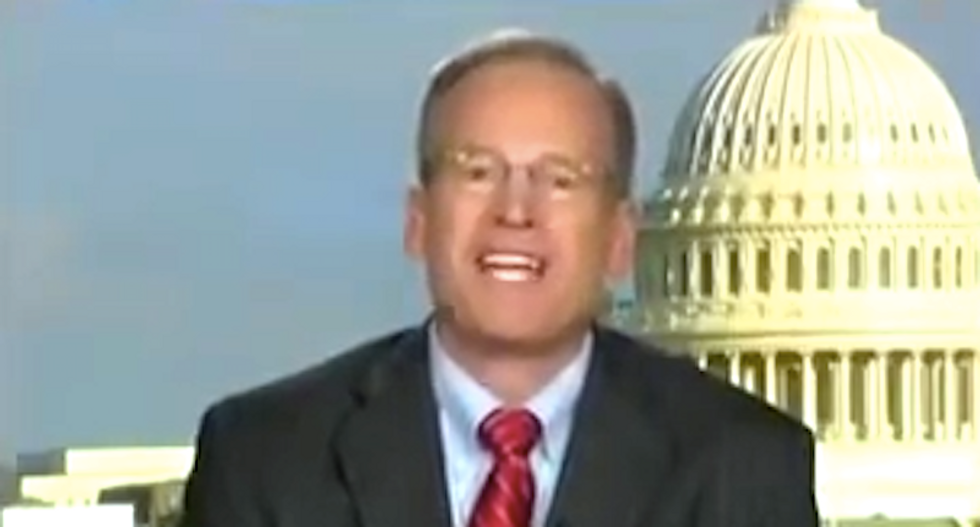 CNN's Poppy Harlow grilled a hapless Donald Trump advisor trying to explain away a bombshell report that found the Republican presidential nominee might not have paid federal income taxes for nearly two decades.

The CNN anchor asked former GOP congressman Jack Kingston how he could square Trump's failure to pay taxes with his campaign rhetoric about the crumbling American infrastructure -- and the surrogate instead bashed the messenger.

"I know the New York Times always is looking for a right-winger who did something wrong, but the reality is, he has paid taxes," Kingston said. "He has abided by the law, and by the way, he has made his millions or his billions by creating jobs, by building bricks-and-mortar projects, by injecting economic developments into communities that needed them."

Kingston said, by comparison, Bill and Hillary Clinton had made millions by giving speeches to foreign governments and Wall Street -- but Harlow interrupted to remind him the couple had paid a 31-percent tax rate last year.

"No jobs were created with the Clinton efforts," Kingston said. "But what I'm saying is, the Donald Trump businesses have created lots of jobs, and they have paid lots of taxes."

Harlow asked how Americans could trust Trump with the nation's finances if he had lost nearly $1 billion in one year, even if he had made it all back over time, as his supporters point out.

"I think the American people are a lot smarter than you think," Kingston said.

Harlow asked whether Trump was a hypocrite for complaining in April 2012 that President Barack Obama had paid only a 20.5 percent tax rate on $790,000.

"Under tax simplification, the tax code will be clearer, there'll be more certainty to it, it will be fairer and it'll be better for all Americans," Kingston said, reminding Harlow he had a degree in economics.

Kingston then began a rambling discourse on the candidates' job plans, and Harlow again asked him whether Trump was a hypocrite for attacking Obama on taxes when he possibly hadn't paid them for decades.

"I can't go back on a 2012 Twitter -- there's some big Twitters out there," Kingston said. "I don't know the context of what he was saying."

An exasperated Harlow offered to read the tweet to Kingston again, and Kingston assured her that Trump had paid taxes but could not release his tax forms because he was under audit.

"Okay, what did he pay?" Harlow asked. "What was his effective tax rate in 2012, when he attacked the president?"

"Let's take a step back," he said. "If there's a problem with the tax code, who is the one who's been in office for 30 years -- it's Hillary Clinton."

Harlow said she doesn't disagree the tax code needs reform, but she wanted to know how Trump could attack the president on taxes when he apparently didn't pay them himself.

"I really think the people back in America, the mainstream, who Hillary Clinton calls deplorable and super-predators and basement-dwellers, they're more worried about their own income, which they've seen fall from $57,000 to $53,000," Kingston said. "We have 43 million people on food stamps right now, 94 million people are underemployed or unemployed -- they know the economy is not working for them right now. They want change, they want an outsider."

He again blamed Clinton for the tax code that Trump apparently exploited in the mid-1990s.

"Hillary Clinton has been part of the architect of it because she's been a U.S. senator," Kingston said. "Before that she was working on trade deals with her husband."