Indians are disgusted by Trump's weird Hindi ad: 'He is the living embodiment of ignorance' 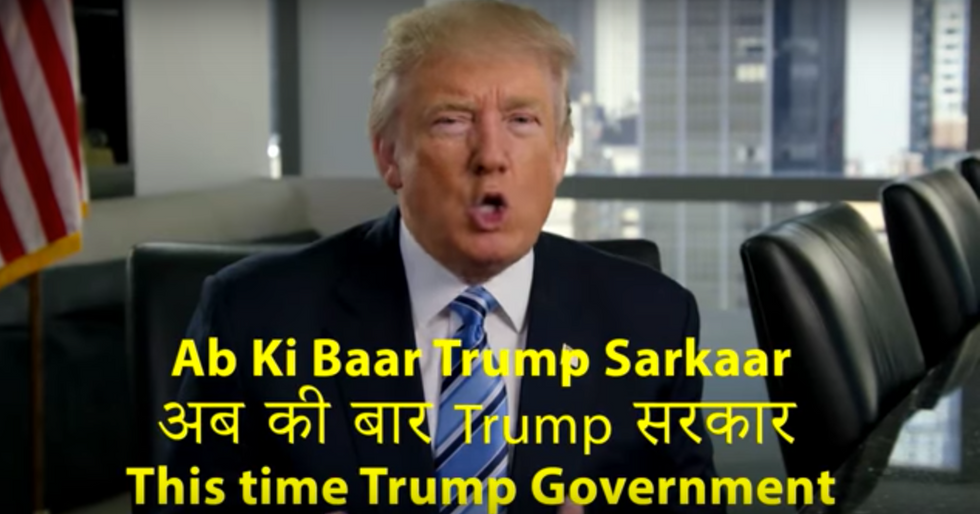 Republican nominee Donald Trump has been trying to reach American-Indian voters, this time with a new ad where he attempts to speak Hindi, BuzzFeed News reports.

However, the BBC writes that his ad campaign fell flat, as some Indians living in Delhi are responding critically to Trump's message.

In the ad, Trump says, "The Indian and Hindu community will have a true friend in the White House. We will defeat radical Islamic terrorism," before transitioning into full out Hindi.

He says, "Ab ki baar Trump sarkar," which translates to, "This time a Trump government." The ad closes with the GOP nominee exclaiming, "We love the Hindus, we love India," a snippet from his RNC speech.

According to BuzzFeed, a member of Trump's Indian-American Advisory Committee said the ad was created for Indian TV channels in the US.

BBC reporter Vikas Pandey spoke to people in the streets of the Indian capital, Delhi, and found that no one was really buying Trump's latest message.

"Mr. Trump seemed to be addressing only Hindus through the video," Shailesh Yadav told Pandey. Yadav also said he was disgusted by it. "How could he just assume that Hindus means India? We are a plural country, Mr Trump. Muslims, Sikhs and Christians also live in this country."

"He just has the support of some Indian-American business families and he thinks whole of India loves him," says Aparimita Pratap who is a law student. Pratap adds, "But then I can't blame him: he is the living embodiment of ignorance."

One respondent, a student named Kriti Kakkar watched the video multiple times because she found it "amusing." Her response to Trump's words? "I thought the US was a developed country, but after seeing this man come this far, I am having serious doubts."

Well, Americans would do well to listen to these individuals. Anand Bhushan, a designer warned the GOP nominee "appears to be trying to cash in on the victory of the Hindu nationalist BJP party in 2014 in India."

Bhushan adds, "Just look what's happening in India. We have seen so many cases of intolerance against minorities in India since 2014. Mr Trump is heading in the same direction."

You can watch the full ad for yourself below.