John Oliver nails parents who are re-segregating schools: You don’t have to be racist to do racist things 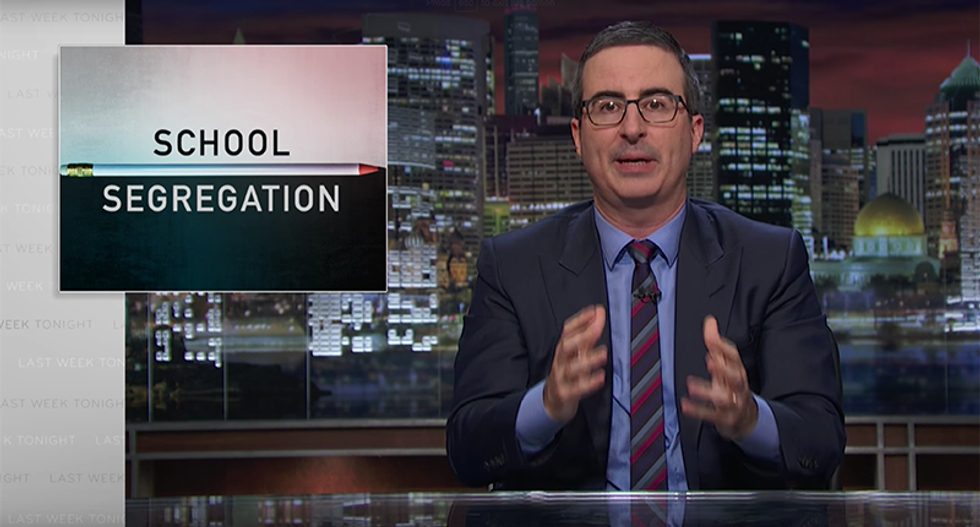 While John Oliver continued his smackdown on Donald Trump Sunday night, he also tackled the disturbing fact that school segregation is on the rise.

On this week's episode of "Last Week Tonight," Oliver explained that despite the 1955 Supreme Court Ruling on Brown v. Board of Education that made it unlawful for schools to be segregated, it wasn't until the 1964 Civil Rights Act that the nation truly began to desegregate. Today, however, neighborhoods and funding are making it increasingly possible to re-segregate them.

A 2014 MSNBC report explained by saying, “The number of schools where 1 percent or less of the student population is white has more than doubled in the past 20 years.”

“As our society has grown more diverse," Oliver began, "nearly 7,000 schools have the same racial makeup as the audience of your average Tyler Perry movie.”

Despite the problem being so acute during the 1950s and 1960s in the South, the region is the least segregated part of the U.S. New York City, on the other hand, is almost the worst.

"Now at this point, if you are in a city like New York, you're probably thinking, 'Oh, splendid, I know where this is going: A story vilifying the backward and racist American South. Let me just grab a handful of kale chips that I can munch on while feeling superior,'" Oliver said. "Well hold on, there is probably something you should know."

While it might be shocking, Oliver was happy to break the hard truth to the so-called liberal city. “Of course racism exists in New York. Have you never seen 'West Side Story?'” he said.

The problem isn't a school problem so much as a neighborhood problem. Majority black schools tend to be located in neighborhoods with high rates of poverty, are staffed by less experienced teachers and have fewer courses that can help prepare students for higher education. The result can be disastrous for the future of a child.

Cities like New York City "never really bothered integrating in the first place," according to Oliver. What is ironic is that Malcolm X was talking about this years ago.

“Classrooms should teach children the importance of self-esteem, not rip it from them — that is what prom is for,” Oliver explained.

If that isn't sad enough, Oliver revealed how schools that are more segregated can have a negative impacted on education quality for children. A study conducted by Berkeley professor, Rucker Johnson, looked at African-American sibling groups where one student went to a segregated and the other didn't. What he found was that students who attended a desegregated elementary school had a higher likelihood of graduating and a 22 percent reduction in the incarceration rate.

In Charlotte, North Carolina, one white parent was furious his daughter wasn't given a spot in a top 10 school and that it went to an African-American child, so he sued. The court agreed and any protections in place were changed, essentially resegregated schools. While it's easy to be angry at a single parent, Oliver was sure to explain that the father moved the entire family to California even before the verdict was decided.

His case wasn't the only one, however. Many parents followed with a lawsuit and the Supreme Court let it happen. They decided it was too high a cost for something that was no longer a problem. But just because President Barack Obama was elected, doesn't mean racism is solved.

While Oliver did show off some incredibly racist parents complaining about how their schools would become dangerous if they were integrated, not all cities are necessarily overtly racist.

"The hard truth is, you don't have to be intentionally racist to do things that have racist effects," Oliver explained. His example was in using the lunch counter as a situation. If one didn't want to see the lunch counter desegregated, not because they hate blacks, but because a mother wants to see her son get his lunch quicker, the result would be the same.

Ultimately, such segregation can become a disadvantage to white students too. "I get the impulse to seize every tiny advantage for your kid — I get that — but segregated schools cause devastating harm to actual children, and not just to their education but to their very sense of self-worth," Oliver said.

When white children lack an exposure to African-American or Latinos, they can end up like the college kids being expelled for putting on blackface. In all honesty, Oliver shows that white students who had exposure to children of other races had zero negative impact.