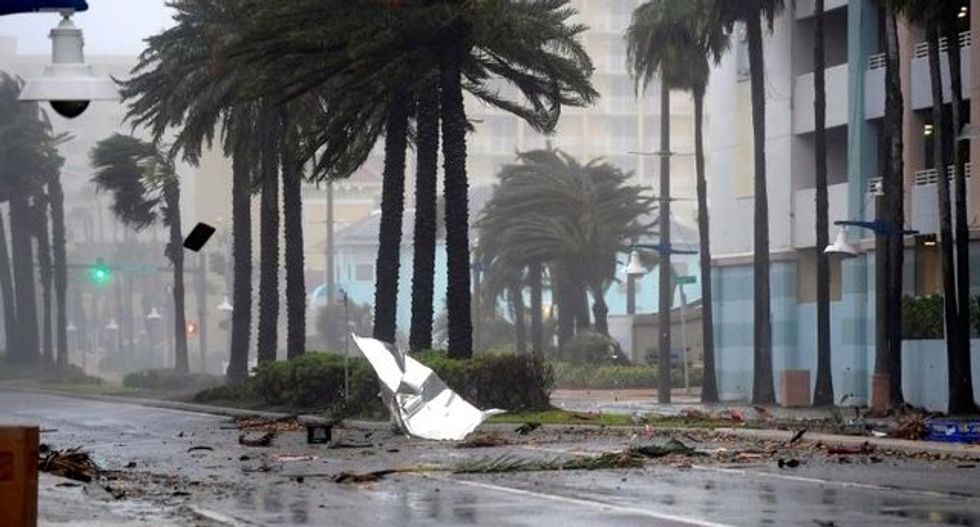 Debris flies through the air as the eye of Hurricane Matthew nears Daytona Beach. REUTERS/Phelan Ebenhack

Robert Walker began to wonder about his plan to ride out Hurricane Matthew in his seaside apartment in Daytona Beach, Florida, when it began to rain indoors.

"It sounded like a jet airplane coming over. I was scared," Walker, a 51-year-old mechanic, as he stood in front of the two-story building whose roof had been peeled back by the storm. Much of its remains lay in an adjoining parking lot.

"It took our roof right off. We were getting rained on," said his neighbor, Michael Dellapuerta, a 49-year-old swimming pool installer. The two men recounted fleeing the building and hiding in a sheltered outdoor stairway during the height of the storm.

Matthew, which killed more than 800 people in Haiti before pounding Florida on Friday, was forecast to churn up the coast of the U.S. Southeast, bringing fierce winds and driving rain, to coastal Georgia and South Carolina before heading out to sea on Sunday.

State officials had urged residents of coastal areas to evacuate ahead of the storm, which had been as strong as Category 4 on the five-step Saffir-Simpson scale before reaching the United States.

But many residents of this popular tourist destination, known for its beaches and auto raceway, said concern for their property, pets or ailing loved ones prompted them to remain during a storm that ripped the facades off buildings, downed trees and light poles and brought a storm surge that pounded waterfront hotels.

Under Daytona Beach's iconic "World's Most Famous Beach" sign, the street was clogged with debris washed up by the ocean. The waves had receded by early afternoon, but widespread damage was evident.

The pavilion of a gas station flattened by winds. Power was out throughout the city, and most businesses were closed.

"It was a little scary. I could hear the shingles coming off the roof, and I knew I couldn't do anything about it. I felt a little bit helpless," said Sam Brayla, 65, who remained in his home with his wife and dog. "It started to rain in the house for a while. I was running around with buckets to save what I could."

John Sidor, a 43-year-old motorcycle mechanic, said that he and his wife had opted to ride out the storm with their two dogs and two cats, in part because they were concerned about trying to evacuate with their animals.

"It took a long time to make the decision. We spent five days thinking about it. But in the end we thought we'd be OK," said Sidor, who added that they decided to remain behind in part because their house was surrounded by a concrete wall that offered protection from flying debris. "It was OK in the end."

Others were less lucky. Lester Vega, 52, surveyed the wreckage of his car, which was crushed when the roof of his apartment building landed on it, parked in the building's courtyard.

"I thought that was a safe place to park, I thought it would be protected here," Vega said, standing surrounded by debris. "No car but mine was hit. And it's totaled."

After seeing photos of black-clad Afghan women in full face veils at a pro-Taliban rally in Kabul, Bahar Jalali, an Afghan-American historian, launched a campaign highlighting the vibrant colors of traditional Afghan dresses.

Rep. Matt Gaetz's assembled lineup of high-profile, out-of-state defense attorneys suggests the Florida Republican is expecting a criminal trial to result from the ongoing FBI investigation into whether he sex-trafficked a minor, legal experts told the Daily Beast for a story published Monday.

The experts also said an apparent lull in the Gaetz investigation, which was first made public in March, doesn't indicate innocence or a lack of charges — as Gaetz would have people believe. Rather, the lull could suggest that prosecutors are considering "a wide range of charges" or that the allegations against him will be "extremely grave and complex."