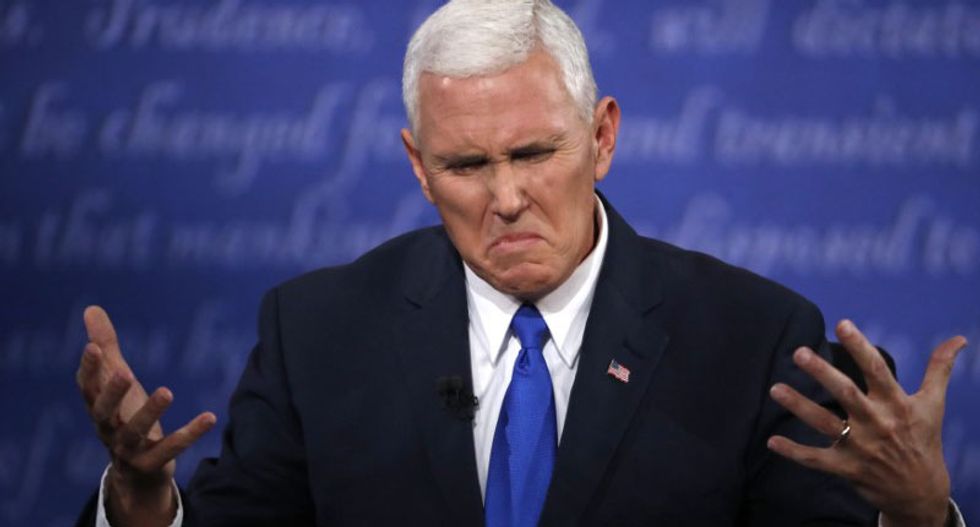 Mike Pence grimaces as he discusses an issue. REUTERS/Jonathan Ernst

A plane carrying U.S. Republican vice presidential nominee Mike Pence skidded off the runway after landing in the rain at New York City's LaGuardia Airport on Thursday, halting flights for at least an hour, officials said.

No one was injured in the incident which occurred less than two weeks before the U.S. presidential election, crucial campaign days for Pence and running mate Donald Trump.

Pence pledged to hit the campaign trail again on Friday.

"So thankful everyone on our plane is safe," the Indiana governor said on Twitter after the incident. "Grateful for our first responders & the concern & prayers of so many."

The Boeing 737 was coming in for a landing and went off the runway at about 7:40 p.m. local time (2340 GMT). The plane was stopped by a crushable type of concrete runway that arrested the aircraft's movement, Federal Aviation Administration spokesman Jim Peters said.

The FAA and National Transportation Safety Board said they will investigate the cause of the incident.

Trump called his running mate before a rally in Geneva, Ohio.

"I just spoke to Mike Pence and he's fine," Trump told the crowd at the rally. "The plane skidded off the runway and was pretty close to grave, grave danger.”

Trump and Pence have slipped in the polls in recent weeks, in part due to negative public reaction to the release of a decade-old video in which Trump made lewd comments about women and said he could grab them by their genitals because he was a celebrity.

Since then, numerous women have come forward to say that they were groped by Trump, claims that he has denied.

On Thursday, Pence had been scheduled to attend a fundraiser at Trump Tower in Manhattan, but was not able to make the event after his plane slid off the runway, a campaign aide said.

Live television footage showed Pence standing in the rain near the plane among emergency vehicles, talking to police and other officials.

Trump's opponent, Democrat Hillary Clinton, on Twitter said she was glad Pence and the rest of the passengers and crew were safe.

There were about 30 people onboard the plane, including Pence's wife, Karen, and daughter Charlotte, MSNBC said.

The plane was coming from Fort Dodge, Iowa, where Pence had participated in a campaign event.

The takeoff from Iowa was delayed for about two hours because of bad weather in New York. Pence had earlier posted on Twitter a picture of himself playing football in the bright sun on grass near his plane in Iowa, citing the delay in leaving for New York.

In 2015 a Delta Air Lines Inc jet landing during a snowstorm at LaGuardia Airport slid off the runway and struck a fence before coming to rest on a snow-covered embankment just feet from the frigid waters of Flushing Bay.

In an interview with "60 Minutes" Sunday evening, Oath Keepers leader Jim Arroyo revealed that active-duty law enforcement is part of their movement and helping with militia training.

"Our guys are very experienced. We have active-duty law enforcement in our organization that are helping to train us. We can blend in with our law enforcement," he said.