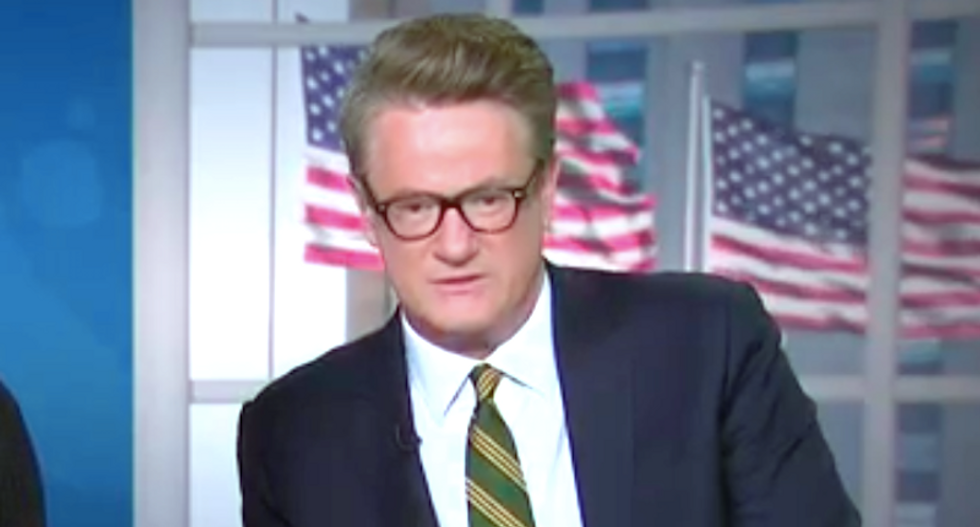 Moments after complaining that anti-government militants had been acquitted on all charges in Oregon for their armed takeover of a federal facility, Joe Scarborough pooh-poohed the notion that angry Donald Trump supporters would consider taking up arms if he lost.

"It's just absolutely staggering to me that the jury acquitted all of those defendants in the case who just basically spit at the rule of law," Scarborough said, turning to Huffington Post reporter Sam Stein. "Anyway, sam, back to your point, there's going to be no blood in the streets. It's deeply offensive that the national media is pushing this narrative."

The host of MSNBC's "Morning Joe" compared anecdotal reports of Trump supporters calling for post-election violence to some of the "bad apples" at Sarah Palin rallies in 2008 who questioned Barack Obama's loyalty to America -- as if those were two unrelated phenomena.

"They had to go through the crowds and find something that called (him) a socialist, claimed it was the end of American democracy -- just stop," Scarborough said. "Stop insulting Trump supporters."

Panelist Donny Deutsch pointed out that 64 percent of Trump supporters believe the candidate's claims that the election will be rigged, and while he doesn't believe that translates to "muskets being taken off shelves" -- he can imagine some isolated instances of election-related violence.

"No one is going to take up muskets," Scarborough said, echoing former GOP lawmaker Joe Walsh's tweet vowing to grab his musket if Trump loses and asking others to join him.

Deutsch reminded Scarborough of the anger journalists have felt at Trump rallies, but the host dismissed that as a characteristic feature of the GOP nominee's support.

Scarborough complained that Democrats had accused George W. Bush of rigging the elections in 2000 and 2004, although those were the only Republican presidential wins "in 87 years," he said, exaggerating for effect.

Stein attended a Trump rally Thursday in Springfield, Ohio, and sat in the crowd, rather than the media pen, and he didn't get the sense that most GOP supporters would react violently to a loss.

"We asked them the question: You wake up Nov. 9 and your guy has lost -- what is that day like for you?" Sten said. "These people were by and large understanding of how democracy works, respectful of the electoral process. They do think there's tilting on the scales for Hillary Clinton when it comes media coverage and so on and so forth, but they said life goes on. 'I have other things in my life that I have to worry about -- jobs, health care, religion."

However, Stein agreed that Trump had "stirred up a lot more animus" than presidential candidates typically do, but he doesn't believe there will be "blood in the streets."

"For a lot of reporters it's been easy to find people like the gentleman on camera saying if Hillary Clinton was elected, she might have to be shot," said panelist John Heilemann. "I'm not predicting revolution, (but) it's not been cherry picking. You can find people at a lot of these events will come on camera or say things to reporters that you won't generally hear at a Clinton rally."

Scarborough again pointed out that those supporters were among the minority, but panelist Willie Geist said Trump had a responsibility to encourage the peaceful transition of power if he lost.

"This is why it's important for Donald Trump on election night should he lose to get up on that stage and say, 'We had a tough race, Hillary Clinton is now president of the United States," Geist said. "Turn the page and move on. I think he'll do that."