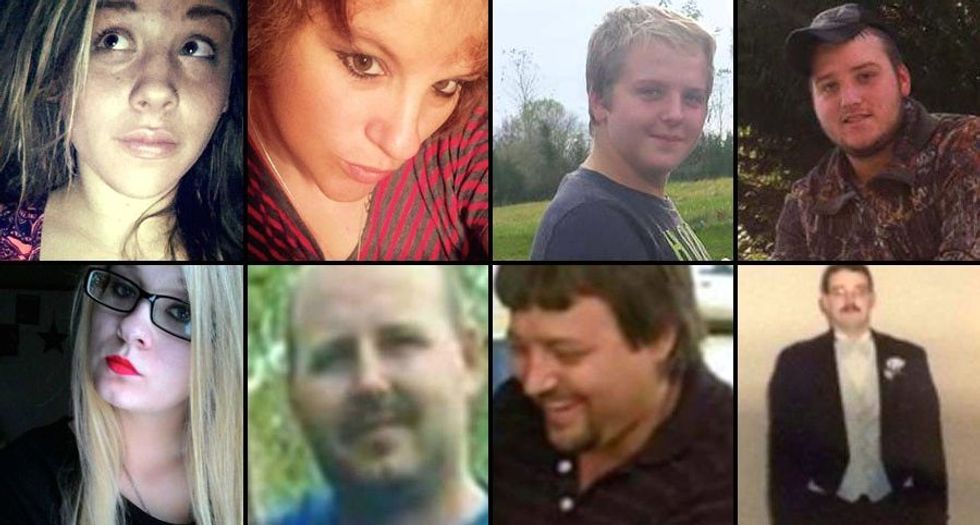 Officials investigating the execution-style killings of eight family members in rural Ohio six months ago have ruled out the involvement of a Mexican drug cartel and now believe whoever committed the crimes was likely from the area, local media reported.

Eight members of the Rhoden family, ranging in age from 16 to 44, were shot to death in the Appalachian foothills on April 22. Local media previously quoted unidentified law enforcement officials saying a Mexican drug cartel could have been involved after marijuana cultivation sites were found at one of the crime scenes.

"Absolutely not," Pike County Sheriff Charles Reader told a local TV station on Monday when asked if he believed Mexican cartels were involved in the murders.

"With the nature of the investigation and the things that have been revealed when conducting the investigation there would be no indication to me as to any type of Mexican drug cartel being involved," he said in an interview with ABC affiliate WCPO Cincinnati.

The sheriff's office did not immediately respond to a request for comment on Tuesday.

Hannah Gilley, 20; Christopher Rhoden Sr, 40; Christopher Rhoden Jr, 16; Clarence "Frankie" Rhoden, 20; Dana Rhoden, 37; Gary Rhoden, 38; Hanna Rhoden, 19; and Kenneth Rhoden, 44, were killed in what officials said was a planned, "sophisticated operation." Many of the victims were shot in the head as they slept. Three young children were found alive.

Tim Reagan, a Drug Enforcement Agency (DEA) officer in Cincinnati, told the TV station he also believed there was no link to the Mexican cartel.

"If there was a strong Mexican cartel connection, I'd feel more comfortable telling you, and I don't see it," he said.

The DEA directed questions on the case to the Ohio Attorney General's office.

Dan Tierney, a spokesman for the Ohio attorney general, said the office would not comment on motives prior to an arrest being made but does believe the crimes were committed by multiple people who were familiar with the property.

Reader said he believes whoever killed the Rhoden family members likely lives in or near Pike County in south-central Ohio, about 95 miles (153 km) east of Cincinnati. Reader did not elaborate on why he felt the killer or killers were local.

He said the motivation for the murders was still unknown, but it was unlikely that drugs played a role.

(Reporting by Timothy Mclaughlin in Chicago; Editing by Matthew Lewis and Alan Crosby)