'People in the studio are even laughing': CNN panel loses it as Trump advocate spectacularly flames out 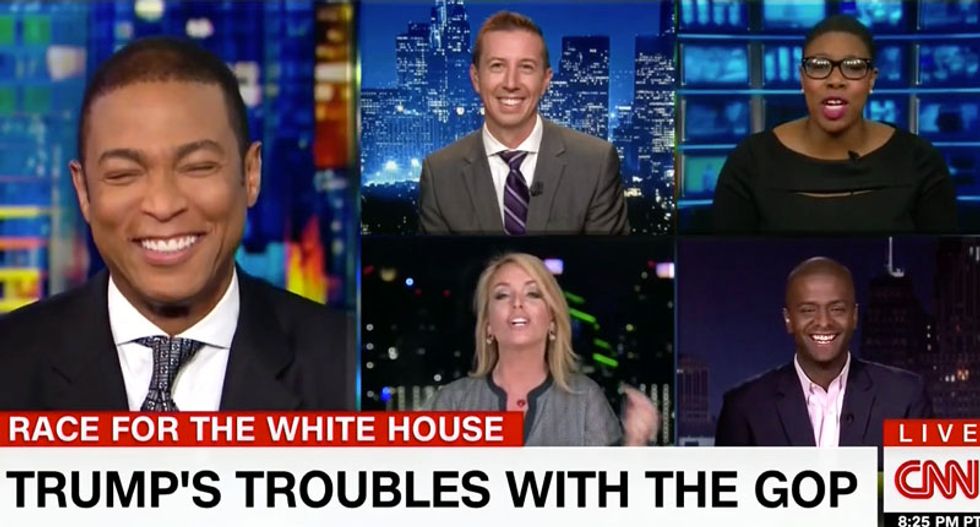 Maybe because it was Friday night-- or because everyone is punch drunk from a presidential campaign that has gone on far too long -- but CNN host Don Lemon and his panel couldn't keep from laughing as a Donald Trump advocate repeatedly denied instances of racism and misogyny by the GOP candidate in the face of overwhelming evidence.

After one memorable exchange, host Lemon told the home audience: "People in the studio are even laughing."

The cause of all the mirth was Trump backer Gina Loudon who denied the GOP nominee had everengaged in racism -- including taking out ads calling for the death penalty for the Central Park Five who were later exonerated.

"Words matter," Sanders lectured Loudon. "Donald Trump is running for president of the United States, okay? So, his words are extremely important because as president, your words -- I mean we can talk about the fact he's discriminated against African-Americans, Latinos in this country, Muslims --"

"He has when?" Loudon interrupted.

CNN analyst Bakari Sellers  jumped in to remind Loudon of Trump's well-documented history when it comes to African- Americans.

"Gina was asking one simple questions about actions, and Donald Trump's actions, and when has he discriminated so I decided we can recite a few of his actions," Sellers said. "We can go to his housing discrimination lawsuits, in which he had to settle not one, but two, because he literally marked 'C' on applications for 'colored.' We can go to the Central Park Five in which he took ads out for these five people --"

"Donald Trump had nothing do with that!" Loudon said.

"Wait, wait wait," host Lemon exclaimed. "You said Donald Trump had nothing do for taking out ads on the Central Park Five?"

[Lemon later showed Loudon a picture of the ad with Donald Trump's signature on it. She had no response.]

When Seller's described Trump mocking a New York Times reporter's disabilities, Loudon once again said, "He did not do that."

Sellers then challenged the Trump booster, "You wanted to list the number of black people who have senior positions on Donald Trump's campaign? You named Katrina Pierson. I bet you can't name two."

At this point, the panel began laughing uncontrollably, with Sanders asking, "Wait, name a third. Who is the third? Omarosa and Katrina are the only two black people."

Host Lemon laughingly told Sanders, "Stop. Stop it y'alls. People in the studio are even laughing."

Things for Loudon didn't get much better after that.