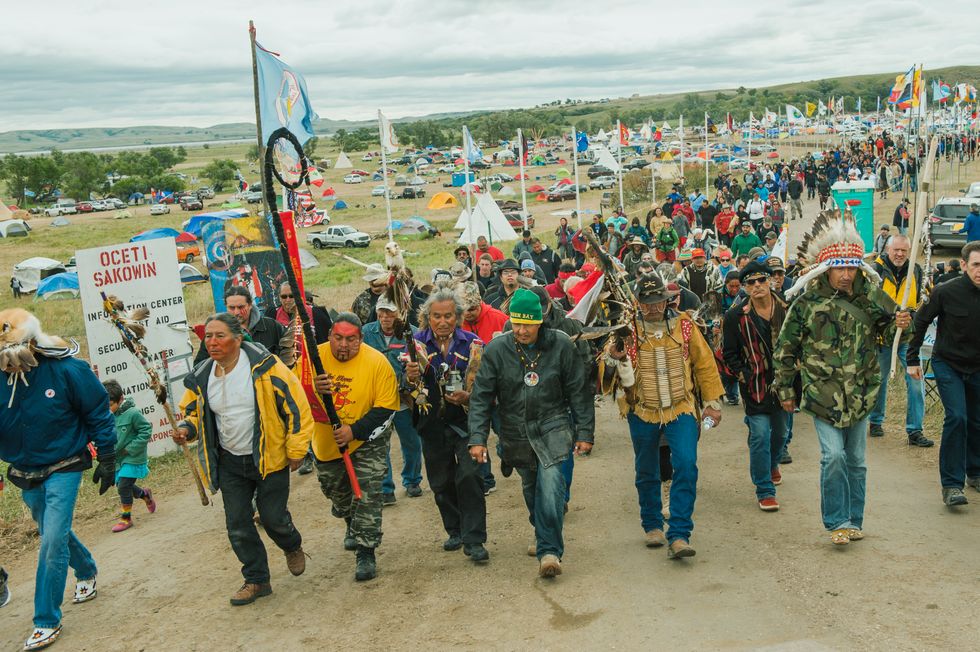 Police in North Dakota began clearing a group of Native American and environmental protesters from an encampment near an oil pipeline construction site on Thursday in a move that could escalate tensions in a standoff that has lasted several months.

The police moved in on the protesters camped on private property near the $3.8 billion Dakota Access Pipeline about 11:15 a.m., according to a statement from the Morton County Sheriff's Department.

Police were also removing roadblocks set up by the demonstrators, but Donnell Preskey, a spokeswoman for the sheriff's department, said protesters had lit some blockades on fire.

Law enforcement used a sound cannon in a effort to force protesters to move, Preskey said by telephone. There had not been any arrests on Thursday and the number of protesters at the site was unknown, Preskey added.

Morton County Sheriff Kyle Kirchmeier said in a statement on Thursday that authorities had been forced to respond after protesters "escalated unlawful behavior" over the weekend, which he said included setting up illegal roadblocks, trespassing and establishing an encampment.

Photos from the sheriff's department showed a line of dozens of heavily armed police standing alongside two armored vehicles.

The 1,172-mile (1,885-km) pipeline, being built by a group of companies led by Energy Transfer Partners LP, would offer the fastest and most direct route to bring Bakken shale oil from North Dakota to U.S. Gulf Coast refineries.

Supporters say it would be safer and more cost-effective than transporting the oil by road or rail.

But the pipeline has drawn the ire of the Standing Rock Sioux Tribe and environmental activists who say it threatens the water supply and sacred tribal sites. They have been protesting for several months, and dozens have been arrested.

On Monday, Native American protesters occupied privately owned land in the path of the proposed pipeline, saying they were the land's rightful owners under an 1851 treaty with the U.S. government.

Members of the Standing Rock Sioux Tribe asked Democratic presidential nominee Hillary Clinton on Thursday to oppose the pipeline. She has so far not taken a public position on the issue.

The Federal Aviation Administration has suspended aircraft from flying over the area affected by the protests. The restriction, issued on Wednesday, bars any aircraft other than those belonging to law enforcement from flying within a radius of 4 nautical miles of Cannon Ball, located about 50 miles (80 km) south of the state capital, Bismarck.

(Reporting by Timothy Mclaughlin in Chicago; Additional reporting by Valerie Volcovici in Washington; Editing by Paul Simao and Peter Cooney)