Professor accuses Latina student of plagiarism because she used the word 'hence' in essay, student claims 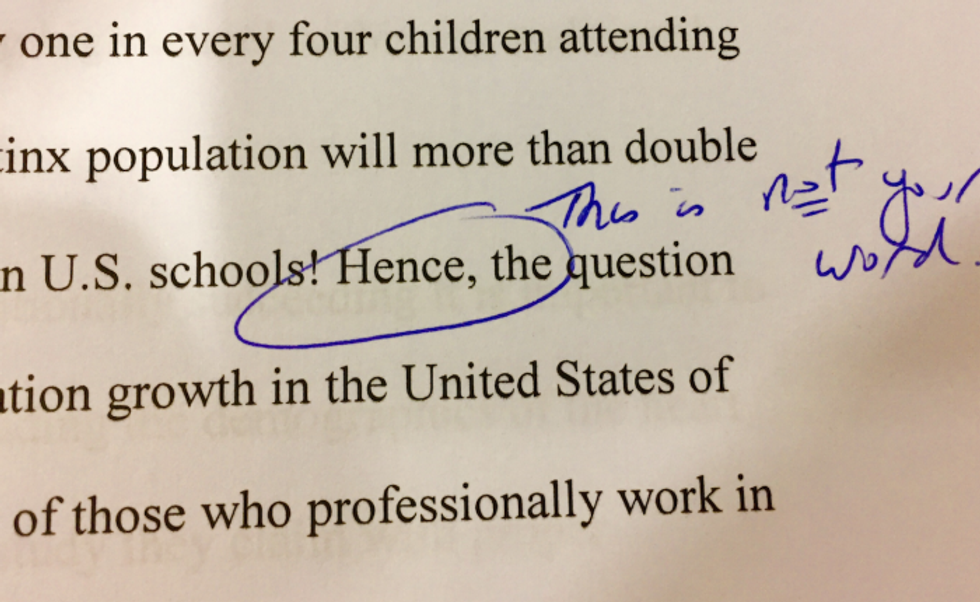 A professor at Suffolk University in Boston accused a Latina student of plagiarism for using the word 'hence.' (VivaTiffany.WordPress.com)

A Hispanic student at Suffolk University in Boston said that a professor circled the word "hence" in her essay and wrote, "This is NOT your word" on the page.

BuzzFeed News reported Friday that the professor handed the paper back to sociology major Tiffany Martínez and said in front of an entire classroom full of students, "This is not your language."

In her written comments on the paper, the professor accused Martínez of trying to pass off other people's writing as her own.

"Please go back and indicate where you cut and paste," the instructor wrote.

Martínez said the professor made a public showing of the accusation of plagiarism.

“She spoke loudly enough that students at the back of the room heard and asked if I was OK after class,” she told BuzzFeed.

Alarmed and feeling like her integrity was being attacked, Martínez said, "I spent the rest of the class going back through every single line, every single citation to make sure that nothing had been plagiarized, even though I knew I hadn’t.”

That afternoon she wrote a blog post called “Academia, Love Me Back," in which she lambasted the subtle -- or not-so-subtle -- racism at work in white academia.

“My last name and appearance immediately instills a set of biases before I have the chance to open my mouth,” she said. “As a minority in my classrooms, I continuously hear my peers and professors use language that both covertly and overtly oppresses the communities I belong to. Therefore, I do not always feel safe when I attempt to advocate for my people in these spaces.”

In this interaction, my undergraduate career was both challenged and critiqued. It is worth repeating how my professor assumed I could not use the word “hence,” a simple transitory word that connected two relating statements. The professor assumed I could not produce quality research. The professor read a few pages that reflected my comprehension of complex sociological theories and terms and invalidated it all. Their blue pen was the catalyst that opened an ocean of self-doubt that I worked so hard to destroy. In front of my peers, I was criticized by a person who had the academic position I aimed to acquire. I am hurting because my professor assumed that the only way I could produce content as good as this was to “cut and paste.” I am hurting because for a brief moment I believed them.

Martínez reported that she has received a deluge of support and acceptance since her blog post went viral.

“It’s surreal how overwhelmingly supportive the academic community has been, but they’re also telling me, ‘This isn’t going to end now,'" she said to BuzzFeed's Tamerra Griffin.

Furthermore, an investigation of the professor has been opened by the Suffolk University Sociology Department.

“The head of the department is very familiar with my work and my writing,” Martínez said. “He looked over my paper and had nothing but good things to say.”