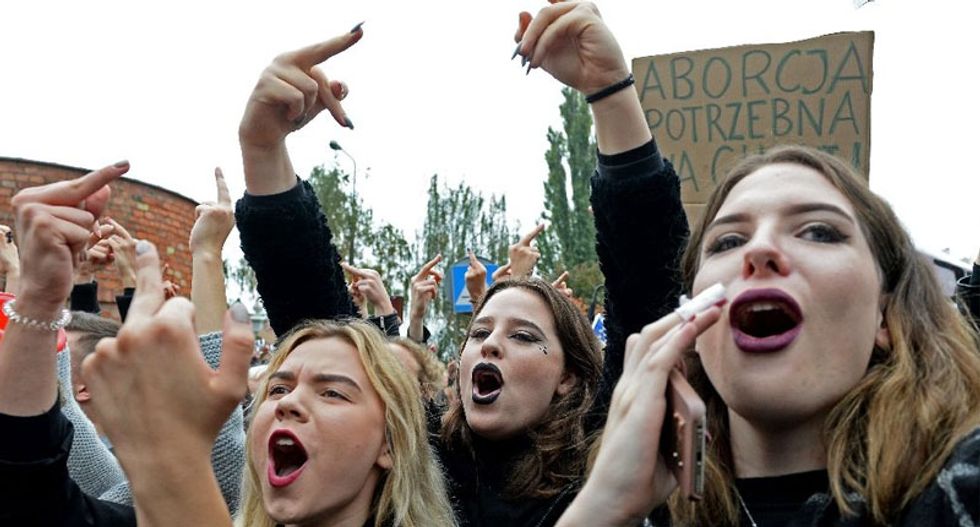 Polish women take part in a nationwide demonstration against a proposed near-total abortion ban in the devoutly Catholic country in Warsaw on October 3, 2016 (AFP Photo/Janek Skarzynski)

A Polish parliamentary committee on Wednesday voted down a bill for a near-total abortion ban, urging the majority rightwing parliament to follow suit after women staged a massive nationwide protest.

The parliamentary justice and human rights committee, which reviews proposed legislation, recommended that lawmakers reject the bill, suggesting the governing rightwing Law and Justice (PiS) party could quash it entirely in a parliamentary vote, likely on Thursday.

While the PiS party which controls parliament generally favours banning abortion, its leaders are well aware that most Poles support existing legislation which allows terminations in certain cases.

"The PiS has backtracked because it was scared by all the women who hit the streets in protest," liberal MP and former prime minister Ewa Kopacz told reporters following the committee vote.

"But the fight isn't over yet," she warned, noting that the bill still needs to be rejected by a majority of lawmakers.

Tens of thousands of black-clad women protested across Poland on Monday against the proposed ban in the devoutly Catholic country, where the existing law is already among the most restrictive in Europe.

PiS lawmakers in late September pushed ahead with a controversial bill that would allow terminations only if the mother's life is at risk and increase the maximum jail term for practitioners from two years to five.

The citizens' initiative tabled in parliament by the Stop Abortion coalition would also make women who have terminations liable to prison terms, though judges could waive punishment.

Poland's influential Catholic Church initially gave the initiative its seal of approval earlier this year, though its bishops have since opposed jailing women.

Passed in 1993, the current restrictive law bans all abortions unless there was rape or incest, the pregnancy poses a health risk to the mother or the foetus is severely deformed.

A poll published last month by the Newsweek Polska magazine showed that 74 percent of Poles want to keep the existing law.

The country of 38 million people sees less than 2,000 legal abortions a year, but women's groups estimate that another 100,000-150,000 procedures are performed illegally or abroad.