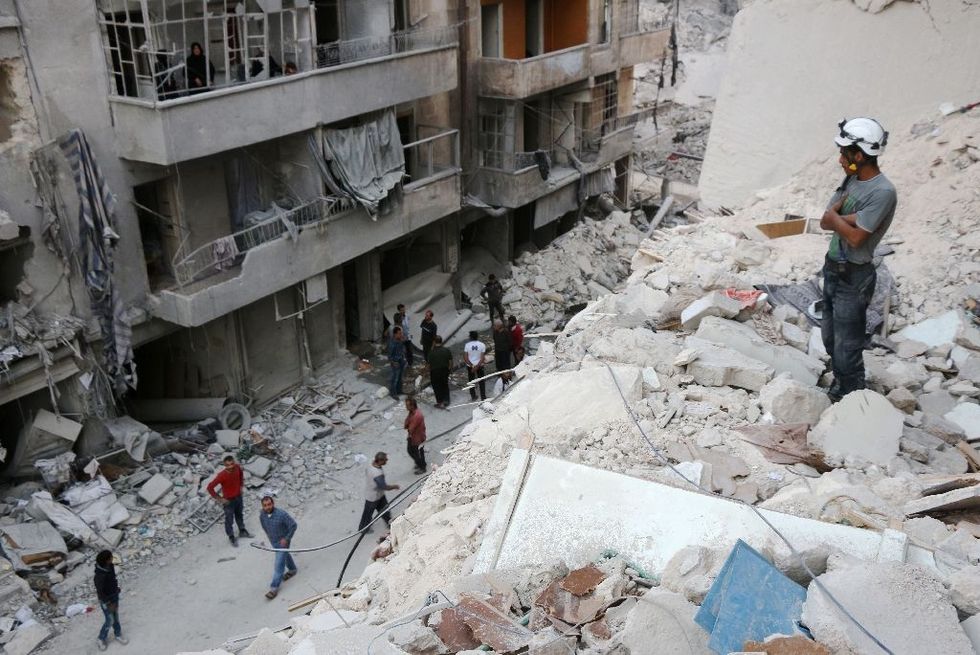 A Syrian civil defence volunteer, known as the White Helmets, stands on the rubble of destroyed buildings during a rescue operation following a government forces air strike on the rebel-held neighbourhood of Bustan al-Basha in Aleppo (AFP Photo/Thaer Mohammed)

Russia on Saturday vetoed a United Nations draft resolution demanding an end to the bombing of Syria's war-battered city of Aleppo.

The draft text presented by France won 11 votes in favor, but there were two votes against -- including Russia -- and two abstentions, notably from veto-holder China.

It was the fifth time that Moscow used its veto to block UN action to end the five-year war in Syria, which has claimed 300,000 lives.

French Foreign Minister Jean-Marc Ayrault had urged the Security Council to take immediate action to save Aleppo from being destroyed by the Russia-backed Syrian bombing campaign.

The council "must demand immediate action in order to save Aleppo," Ayrault said ahead of the vote.

Russia has presented its own rival draft text that urges a ceasefire but does not make any mention of halting the bombing campaign, but diplomats said that measure was also expected to fail.

"What is at stake today is first and foremost the fate of Aleppo and its people," Ayrault told the council.

"But it's more than that -- it's the hope of establishing at last an end to a conflict for which we are all, all of us, paying the catastrophic consequences."

In a message directed at Russia, Ayrault said any country that opposes the French measure will "give Bashar al-Assad the possibility of killing even more."

At least 250,000 people are living under siege in rebel-held east Aleppo, and facing almost-daily heavy bombing since the Russian-backed Syrian army launched an offensive to retake the city last month.

Russia and Venezuela voted against the French resolution, while China and Angola abstained.