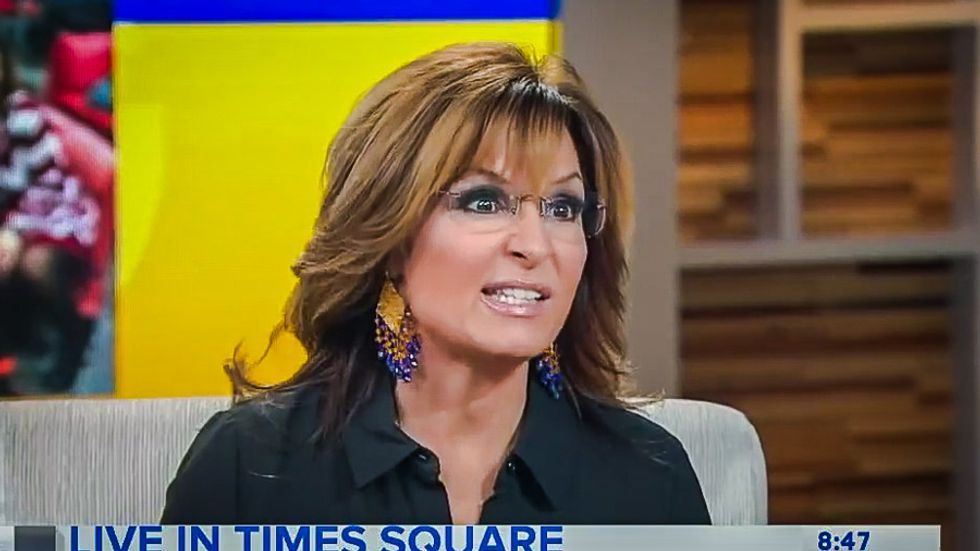 The last remaining question about last night's debate was whether former Alaska Gov. Sarah Palin would post a factually challenged defense of Donald Trump refusing to say whether he would accept the results of the November election.

The answer, as if there was ever any doubt: You betcha!

In a Facebook rant about the debate, Palin attacked the media for criticizing Trump for saying he will keep the country "in suspense" when it comes to accepting the final election results.

You see, Palin believes that Trump shouldn't accept any election results unless he's 100% sure that there isn't any "cheating" at the polls, just as he should have never signed a pledge to support the Republican nominee for president unless he received fair treatment from the party as a whole.

"When Trump is pressed on this, it harkens back to all the GOP primary candidates who screamed at Trump to support the Republican nominee - no matter what - and Trump initially responded that he could, depending on fair treatment," she writes. "That is WISE and INSIGHTFUL! Trump got screwed in that deal when he eventually pledged to support the nominee and then some of his fellow candidates turned tail and refused to reciprocate when Trump won."

She then went on to say that Trump actually did America a service by alerting us all that Democrats were trying to swindle the country out of an election that should be Trump's.

"Trump gave potential cheaters fair warning that we'll not give them any quarter," she said. "We'll hold them accountable. They'd better be on their toes. Cheaters will not win. Of course Trump will accept the legitimate outcome of a legitimate election! What the heck is so hard to understand about that?"

What's "hard to understand" about it is that several secretaries of state -- including Republicans in swing states -- have said there is no way that the election is being "rigged" against Donald Trump, no matter how many times he says that it is. And given that Republicans are actually in charge of elections in key states such as Ohio, Florida, Iowa and North Carolina, it's hard to see how Trump could possibly lose the election due to supposed voter fraud.