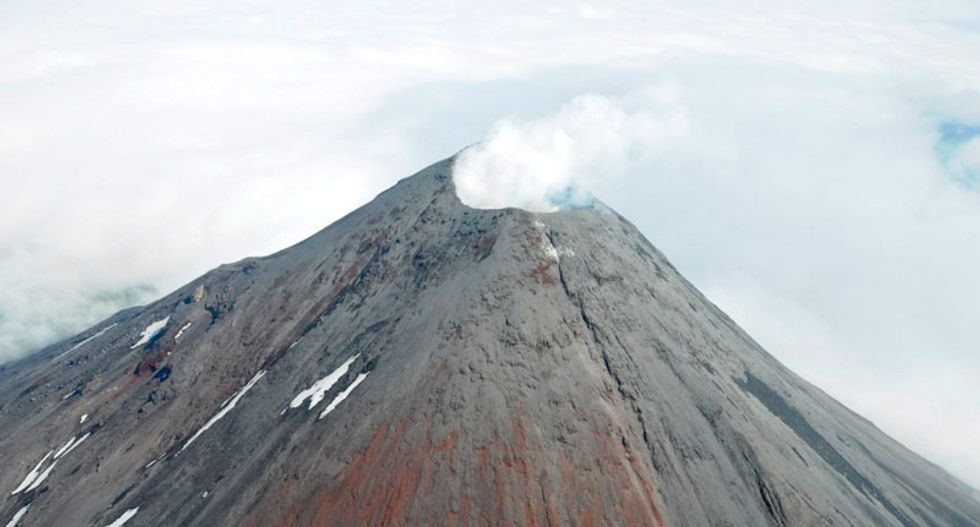 An aerial photograph shows the Cleveland Volcano during the time a small lava flow, or dome, was accumulating in the summit crater as the 660 foot wide summit crater emits a white, largely steam condensate cloud in this August 8, 2011 file photo. REUTERS/Kym Yano, National Oceanic and Atmospheric Administration/Handout File Photo

Scientists raised the alert level for a remote Aleutian volcano on Monday after an explosion was detected on the mountain and heard by residents of a tiny village some 45 miles (72 km) away, a monitoring website said.

Cleveland Volcano, a 5,676-foot (1,730-metre) peak on the uninhabited Chuginadak Island, about 940 miles (1,504 km) southwest of Anchorage, was raised to orange from yellow by the Alaska Volcano Observatory.

The orange code, the second-highest on the scale, is issued when a volcano is "exhibiting heightened or escalating unrest with increased potential of eruption," according to the observatory. A red code is issued when an eruption is imminent or under way.

The observatory said that an explosion was detected on Cleveland by both infrasound and seismic data and heard by residents of Nikolski, a settlement of less than 50 people on Umnak Island about 45 miles (72 km) to the east.

Scientists said that cloudy weather obscured Cleveland's peak in satellite images but that no evidence of an eruption cloud had been detected at a height of 28,000 feet (8,534.4 meters).

Previous explosions have spewed ash emissions, according to the observatory.

The volcano, named after U.S. President Grover Cleveland, is one of the most active of Alaska's scores of volcanoes and its ash cloud could pose a threat to aircraft when it erupts.

It forms the western portion of Chuginadak Island and has been intermittently producing small lava flows and explosions since 2001, the observatory said.

Chuginadak Island is part of Alaska's Aleutian archipelago, a geologically active chain of volcanic islands that is part of the Pacific Ring of Fire and is very prone to earthquakes.

Earlier this year Mount Pavlof on the Alaska Peninsula erupted with little advanced warning, spewing an ash cloud up to 20,000 feet (6,096 meters) high that prompted aviation warnings across the region.

Pavlof is currently at yellow on the alert scale, meaning that it is "exhibiting signs of elevated unrest" but not erupting, according to the observatory.