Seth Meyers roasts Trump: The only 3 am phone call he's ready for is one about Rosie O'Donnell 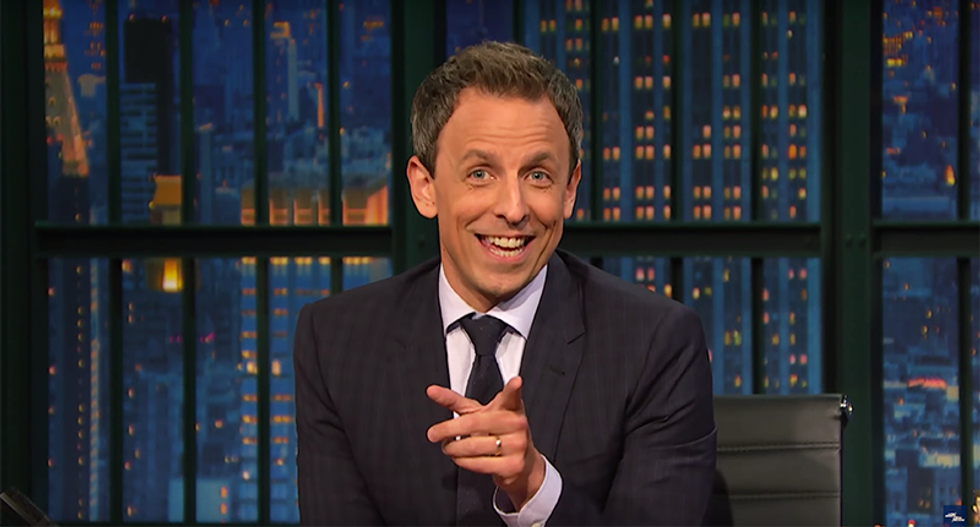 Republican presidential candidate Donald Trump had a terrible week, last week. Never mind becoming a laughing stock on Saturday Night Live, his bizarre accusations in Manheim, Pennsylvania that Hillary Clinton is cheating on her husband or his Twitter rant at 3 a.m., which lacks control and temperament. Now, it seems Trump is having his Mitt Romney 47 percent moment, revealing that the reason he might not be giving up his taxes is because he doesn't pay any. If that's not bad enough, we also found out that isn't even the worst that the New York Times has.

"By the time last week ended, it had already been one of the worst weeks for any presidential candidate in history," Seth Meyers explained, opening his "Closer Look" segment in Monday night's show. Meyers noted that Trump had a meltdown that can only be described as what happens when you leave a Yankee Candle in the sun.

The plus side of Trump's Twitter tirade, however, is that the Republican nominee made history by becoming the first nominee of a political party to recommend pornography to his supporters. "You might think, 'Who wants a president so irrational and unstable that he can't stop himself from tweeting negative things about a Miss Universe winner at 3 a.m.?' Well, Trump tried to spin it as a positive," Meyers said, showing Trump's final tweet from the rant, saying at least folks know he'll be awake at 3 a.m.

"Especially, if the call is, 'Mr. President, it's the North Koreans. They want your thoughts on Rosie O'Donnell,'" Meyers mocked.

But then the Trump nightmare happened: Trump's comment at the debate claiming "I'm smart" for not paying taxes was just the half of it. In a few pages of Trump's 1995 tax return, obtained by the New York Times, Americans learned that Trump may not have paid taxes for nearly two decades. Billionaire Mark Cuban trolled Trump calling him "unpatriotic." Corey Lewandowski had a ragegasm live on television. Even a Trump-loving Congressman lost his cool in an interview.

A curious thing that has developed from the taxes story is that the returns were mailed anonymously to The Times with a return address reading, "Trump Tower." Meyers wondered who would have a motive to try and destroy Trump. He flashed Ted Cruz on the screen, "Okay, maybe. Fine. But seriously, who else?" he asked as photos of the 16 Republican presidential candidates littered the screen, with Paul Ryan, Trump's ex-wives, Sen. John McCain (R-AZ), Trump's youngest daughter, President Obama, Rosie O'Donnell, Megyn Kelly, Mike Bloomberg, the cast of "The View," Mark Cuban, band mates from the Rolling Stones, Bono, Mexico and even Meyers himself. "Okay, fine. I get it."

The spin from the campaign began as they attempted to paint Trump's tax-free lifestyle as a positive because he's smart enough to have worked the system. It didn't go over so well, however. CNN's Jake Tapper called out former New York Mayor Rudy Giuliani, as Giuliani tried to tout Trump as a genius. "Does that mean the rest of us are stupid," he asked.

Oddly, Trump has sold himself as this genius businessman, who can fix the economy. "But the people who invested in Trump's companies might not agree, because while Trump made roughly $45 million between 1995 and 2009 while the chairman or chief executive of his casino company, ordinary investors saw the value of their shares plunge to 17 cents from $35.50," Meyers cited The Times report. "Normally, to get that screwed you have to go into the casino. And then, at least they have the decency to give you free drinks."

Trump's investors even saw a massive loss at a time that the market was going up. Meyers noted that they would have done better had they picked stocks at random. Warren Buffet hilariously described it by saying that a monkey throwing a dart at the stock page of the newspaper would have made 150 percent of his investment. "Of course, once he said that, Monkey with a Dart became the leading favorite for the 2020 GOP nomination," Meyers mocked. "And you just know Ted Cruz will eventually endorse that monkey."

What's even crazier, is that after all of this Trump still refuses to release his tax returns. "Whatever's in there is worse than a $916 million loss," Meyers said before commenting with his own conspiracy theory. "I think you're poor. I think you pretend to be rich, but you've been going around town for 18 months selling cheap hats. And you know what else I think? I think you're only up at 3 in the morning because you have a second job answering customer service calls from India." If that isn't bad enough, Meyers thinks Trump only wants to live at the White House because Michelle Obama has a garden and he wants free tomatoes.

"Or maybe you don't want to be president because you assumed it paid a billion dollars a year and then found out it was only $400,000," Meyers began. "And now, oh my God, you're panicking and you're desperate to find a way out and, oh my God, that's it! Trump Tower! You sent the letter!"