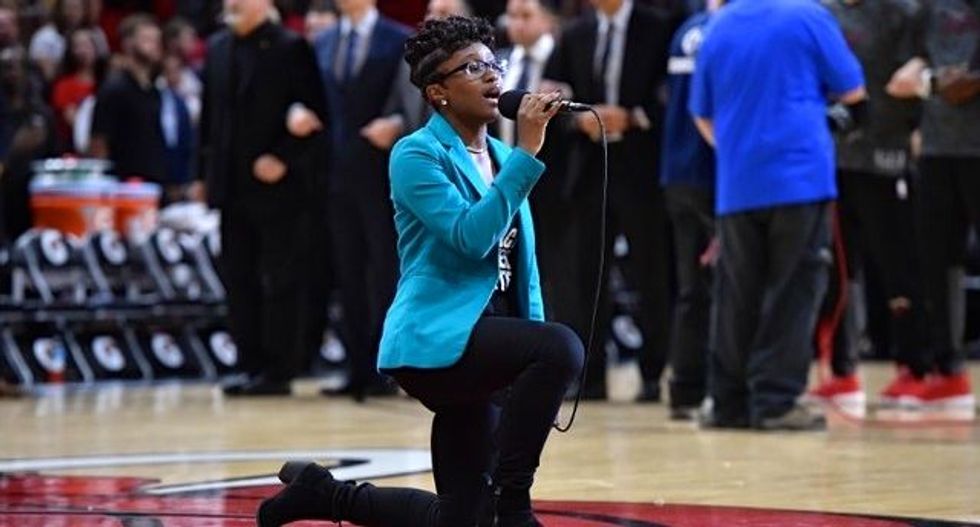 A singer knelt while performing the national anthem at a Miami Heat basketball game on Friday and opened her jacket to reveal a shirt that read "Black Lives Matter," a variation on a protest that has punctuated many U.S. sporting events since the summer.

Like other anthem protests, the gesture by Denasia Lawrence was intended to highlight what activists say is unfair police treatment of minorities. The trend began in August when San Francisco quarterback Colin Kaepernick took a knee during the playing of the "Star-Spangled Banner" before a preseason National Football League game.

Lawrence, a social worker, wrote on Facebook that the opportunity at the preseason Heat game "was bigger than me."

In a statement, the Heat said, "We were unaware of it ahead of time."

Lawrence was not the first anthem singer to take a knee. Leah Tysse knelt while singing before a preseason Sacramento Kings game two weeks ago.

Kaepernick's silent protest ignited a fierce national debate over whether refusing to stand during the anthem is disrespectful to the country and its military or a political expression that goes to the heart of the U.S. constitutional guarantee of free speech.

Other players in various sports, both at the professional and amateur levels, have taken up the protest, with some raising their fists in a move that recalls a famous gesture by U.S. track and field athletes Tommie Smith and John Carlos during a medal ceremony at the 1968 Olympic Games in Mexico City.

The Heat players and coaches stood and locked arms during the anthem as they have done throughout the preseason as a show of unity.

"Throughout all of this, I think the most important thing that has come out of this is a very poignant, thoughtful dialogue," said head coach Erik Spoelstra after his team lost to the Philadelphia 76ers. "We've had great dialogue within our walls here, and hopefully this will lead to action."