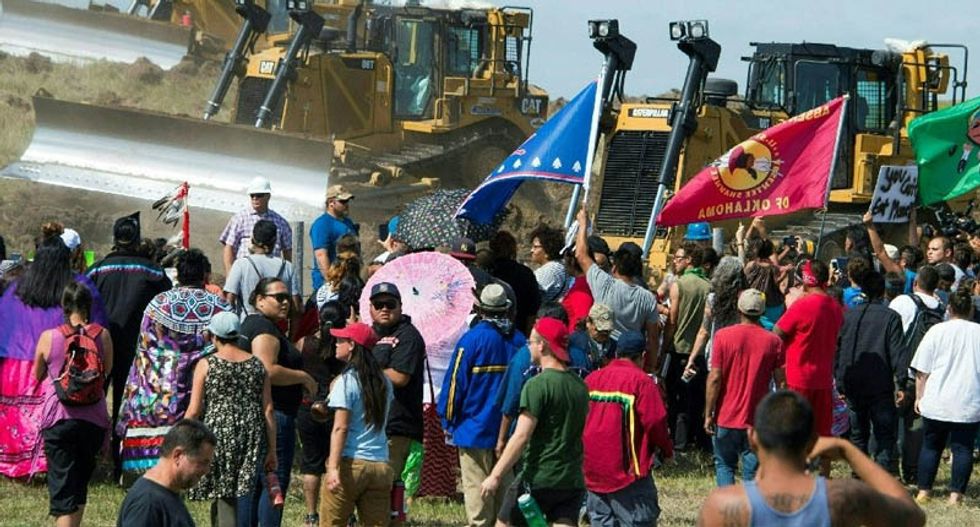 A Native American tribe and other activists opposed to a multibillion-dollar oil pipeline project in North Dakota vowed on Friday to continue their fight through direct action, legal challenges and growing celebrity support, a day after police arrested 141 of their members.

Thursday's arrests came at the site of the $3.8 billion Dakota Access pipeline when dozens of riot police swept through a protester camp on private land using pepper spray, bean bag rounds and an audio cannon against demonstrators who refused to leave.

Some of the protesters set fire to roadblocks and threw rocks, bottles and Molotov cocktails at the law enforcement officers, the local Morton County Sheriff's Department said.

Dallas Goldtooth, 33, an activist from the Indigenous Environmental Network, said on Friday the demonstrators were taking the day off to regroup and pray. He added there were still ample opportunities for them to stop the pipeline.

The sheriff's department said in a statement Friday that it was maintaining a presence in the area and that a section of a state highway remained closed. Protesters were nonconfrontational, the department said, but still not cooperating with orders to leave a bridge that was damaged by a fire on Thursday. One additional protester was arrested on Friday morning, the department said.

The 1,172-mile (1,885-km) pipeline, being built by a group of companies led by Energy Transfer Partners LP , would offer the fastest and most direct route to bring Bakken shale oil from North Dakota to U.S. Gulf Coast refineries.

Supporters say the pipeline would be safer and more cost-effective than transporting the oil by road or rail.

'WE WON'T STEP DOWN'

But the project has drawn angry opposition from the Standing Rock Sioux Tribe, as well as environmental activists, who say it threatens local water supplies and sacred tribal sites. They have been protesting for several months, and a total of 411 protesters have been arrested since Aug. 10, the sheriff's department said.

The tribe wants observers from the U.S. Department of Justice to probe the use of force by police, said Sue Evans, a spokeswoman for the Standing Rock Sioux Tribe.

"We've heard many, many reports on injury and unlawful arrests," Evans said. "We would like those law enforcement abuses investigated."

In a statement, Dave Archambault II, the tribe's chairman, said: "We won't step down from this fight ... This is about our water, our rights, and our dignity as human beings."

Amid the protests, the U.S. government in September halted construction on part of the pipeline. The affected area includes land under Lake Oahe, a large and culturally important reservoir on the Missouri River where the line was supposed to cross.

The U.S. Army Corps of Engineers is currently deciding whether to grant the pipeline company an easement to build under the lake.

The decision will "hopefully be soon" but there is no estimated time of arrival, a spokesman for the Corps, Thomas O'Hara, said on Friday.

Meanwhile, opposition to the pipeline continues to gather the backing of celebrities. Among the actors who have already lent their voices to the cause are Shailene Woodley, Susan Sarandon and Riley Keough.

The support of famous people has frustrated Morton County Sheriff Kyle Kirchmeier, who said on Thursday he resented being asked by "outsiders and millionaire Hollywood actors" to let "agitators and rioters" break the law.

(Reporting by Timothy Mclaughlin in Chicago; Additional reporting by Julia Harte in Washington and Mica Rosenberg in New York; Editing by Matthew Lewis)