US polls narrow as Hillary Clinton grapples with email fallout 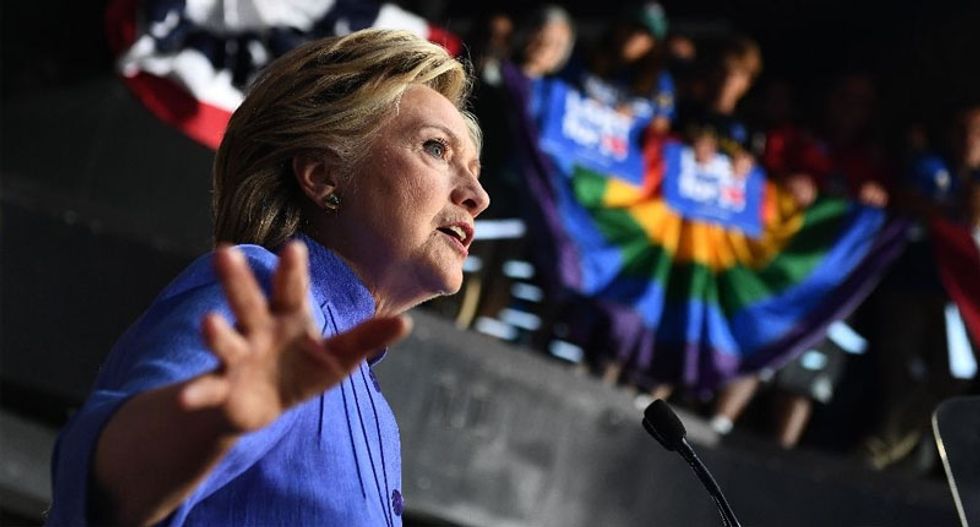 The race for the White House narrowed noticeably on Sunday as Hillary Clinton sought to shake off a renewed FBI probe of her emails and Donald Trump blitzed western states nine days ahead of the vote.

An ABC News/Washington Post poll put the Democratic presidential candidate just one point ahead of her Republican challenger Donald Trump at 46-45 percent in a four-way race.

In Florida, which is a must-win for the tycoon, Trump overcame a one-point deficit in September to enjoy a four-point lead, according to a New York Times Upshot/Siena College Research Institute poll.

The 69-year-old former secretary of state hit the ground hard Sunday, ticking off five campaign stops in Miami and Fort Lauderdale -- an early vote brunch in an Irish pub, an African-American Baptist church, a soul food restaurant, an early voting site and a rally in a gay nightclub.

Much of her two-day visit to the sunshine state focused on encouraging early voting and she says a record 200 million Americans had registered to vote, 20 million of whom had already done so.

"We've got some big issues we've got to address, the last thing we need is somebody who is a loose cannon," she told New Mount Olive Baptist Church, swiping her rival in Fort Lauderdale.

But her campaign was jolted when FBI boss James Comey wrote to lawmakers Friday announcing that his agents are reviewing a newly discovered trove of emails, resurrecting an issue Clinton had hoped was behind her.

"We cannot get distracted by all the noise in the political environment, we've got to stay focused," she said. "The best way to repudiate a negative, hateful, bigoted vision is by voting."

However, Trump jumped on the fresh controversy campaigning in Nevada, Colorado and New Mexico on Sunday, when he told a Las Vegas rally that "her criminal action was willful, deliberate, intentional and purposeful."

The Clinton campaign went on the offensive against America's top cop, with the nominee calling Comey's move "deeply troubling" on Saturday and her aides stepping up the pressure on Sunday.

"It was long on innuendo, short on facts, so we're calling on Mr Comey to come forward and explain what's at issue here," Clinton's campaign chairman John Podesta told CNN.

Leading Democratic senators have also urged Comey and his boss, Attorney General Loretta Lynch, to make clear by Monday night whether the new emails are pertinent to the investigation into Clinton's handling of classified material that the FBI closed in July.

Although the candidate looking to make history as America's first female president remains the overwhelming favorite in the race, Trump has sought to exploit the FBI's decision by deflecting attention from his own scandal over alleged sexual misconduct accusations.

"Hillary's corruption shreds the principles on which our nation was found," he told the Las Vegas rally on Sunday. "The only way to beat corruption is to show up and vote."

"We are now leading in many polls, and many of these were taken before the criminal investigation announcement on Friday -- great in states!" the 70-year-old real estate billionaire posted earlier on Twitter.

He also kicked off the penultimate Sunday before Election Day in church, attending a service in Las Vegas, but making no remarks. He has two further rallies scheduled Sunday in Colorado and New Mexico.

According to the New York Times, the FBI renewed its probe after agents seized a laptop used by Clinton's close aide, Huma Abedin, and her now estranged husband, Anthony Weiner.

A disgraced former congressman who resigned in 2011 after sending explicit online messages, Weiner is under investigation over allegations he sent sexual overtures to a 15-year-old girl.

Trump's campaign manager Kellyanne Conway lashed out at Clinton on Sunday for criticizing Comey's handling of the email trove.

"She just has to call her friend and confidante Huma Abedin and say tell us what's in the emails, tell us what's on the devices that you shared with your pedophile husband," Conway told Fox News.

"I think it's a terrible strategy but it's very much the strategy of Hillary Clinton throughout her career which is to shoot the messenger, attack the person who's calling into question your fitness for office."

Clinton's campaign has been overshadowed from the start by allegations she put US secrets at risk by using a private server based in her home for all email correspondence as secretary of state.

Trump on Saturday called the latest development "the biggest political scandal since Watergate."

However, experts say it is highly unlikely the FBI will make significant progress in the investigation before polling day and few observers expect Clinton will ultimately face criminal charges.