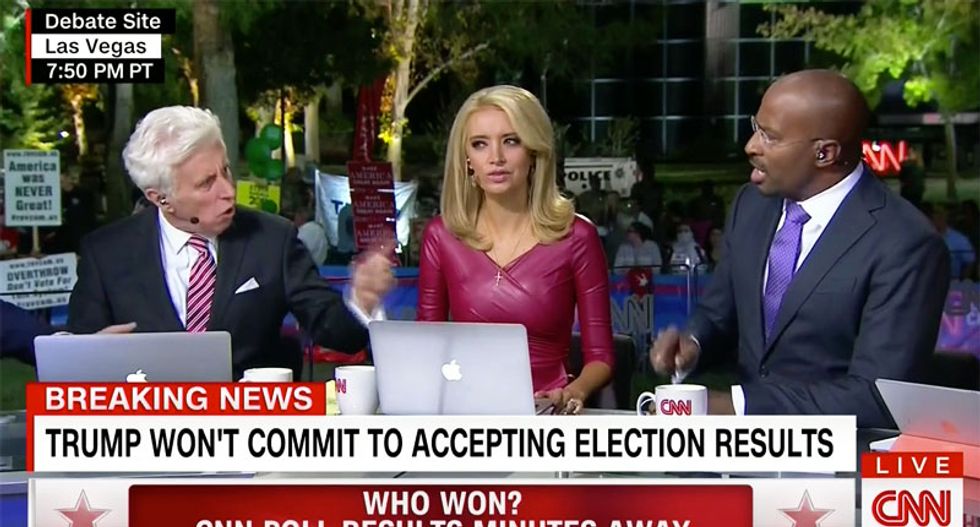 If nothing else, the third 2016 Presidential Debate will be remembered for GOP nominee Donald Trump's refusal to say he will accept the will of the voters on November 8.

In a CNN a very contentious CNN panel, analyst Van Jones was given a moment to speak after Trump advocate Kayleigh McEnany attempted to spin Trump's stunning declaration that he would “Look at it at the time,” when the polls close as to whether he would concede.

'This is a really sad night," he began. "This is a very sad night for the country. You can't polish this turd."

"I'm going to be very, very clear about this," he continued. "Al Gore respected the Constitution, respected the process, respected every voter. He went to our Supreme Court, asked for a resolution on his own terms as did George W. Bush. And when the election results were certified, he told his party and base to stand down and accept this, even though a lot of us were very, very upset. What you just got now was the nominee of a major party for the first time in our history signaling to the American people that he has so little faith in our institutions, that he has so little faith in our people, and so little faith in our courts, and so little faith in the Republican governors, the Republican secretaries of state across this country that he will not stand in front of his own country, in front of his own nation and say that he respects the process and the outcome."