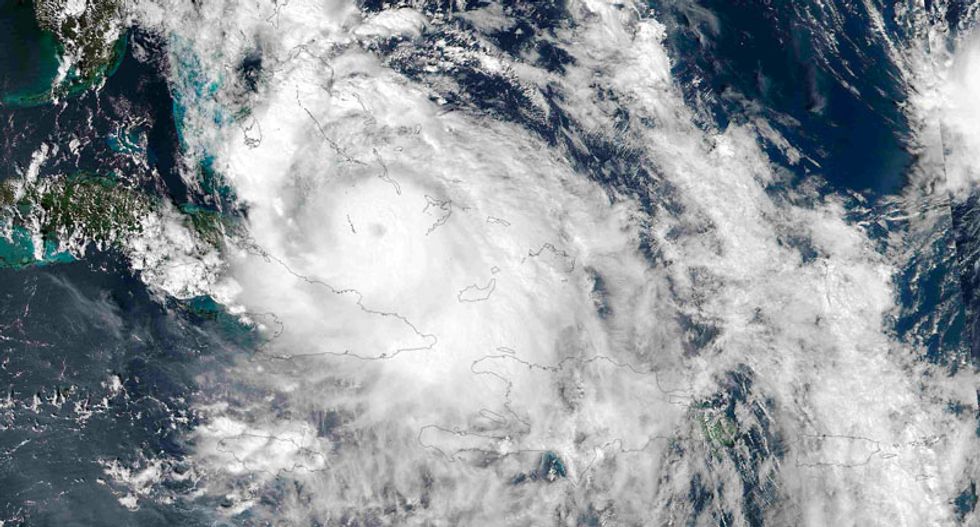 Hurricane Matthew, the fiercest Caribbean storm in nearly a decade, strengthened as it barreled toward the southeastern United States on Thursday after killing at least 69 people, mostly in Haiti, on its deadly northward march.

As Matthew blew through the northwestern Bahamas on Thursday en route to Florida's Atlantic coast, its winds increased to 140 miles per hour (220 kph), the U.S. National Hurricane Center said.

That made it an "extremely dangerous" Category 4 hurricane and it was likely to remain so as it approached the United States, where it could either take direct aim at Florida or brush along the state's coast through Friday night, the center said.

Some 65 people were killed in Haiti and thousands were displaced after the storm smashed homes and inundated neighborhoods earlier in the week.

The National Hurricane Center extended its hurricane warning area farther north into South Carolina and more than 12 million U.S. residents were under hurricane watches and warnings, according to the Weather Channel.

Roads in Florida, Georgia and North and South Carolina were jammed and gas stations and food stores ran out of supplies as the storm approached, carrying with it strong storm surges, heavy rain and high winds.

The damage could be "catastrophic" if the hurricane slammed directly into Florida, Governor Rick Scott warned, urging some 1.5 million people in the state to heed evacuation orders.

“If you're reluctant to evacuate, just think about all the people who have been killed,” Scott told a news conference on Thursday. “Time is running out. This is clearly either going to have a direct hit or come right along the coast and we're going to have hurricane-force winds."

Scott, who activated several thousand National Guard troops to help deal with the storm, warned that millions of people were likely to be left without power.

With an expected storm surge of up to 9 feet (2.7 meters), he said people should stay away from beaches. "Do not go on the beach," he said. "This will kill you."

The four U.S. states in the path of the hurricane declared states of emergency, a move empowering their governors to mobilize the National Guard.

It was too soon to predict where in the United States Matthew was likely to do the most damage, the Hurricane Center said.

Shelters in Florida, Georgia and South Carolina were opened for evacuees. Federal emergency response teams were coordinating with officials in all four states and stockpiling supplies.

In Washington, White House spokesman Josh Earnest encouraged residents in the path of the storm to heed warnings from local governments about evacuations and seeking shelter.

Schools and airports across the region were closed on Thursday and some hospitals were evacuated, according to local media. Hundreds of flights were canceled in and out of the Florida cities of Miami, Fort Lauderdale and Orlando, industry website Flightaware.com said.

Matthew was heading northwest at about 14 mph (22 kph) and was expected to continue on this track on Thursday, turning north-northwest on Thursday night or early on Friday, the hurricane center said. The eye, or center, of the storm was moving between Andros Island and New Providence in the northwestern Bahamas on Thursday.

In Nassau, which is on New Providence, it was raining steadily on Thursday morning and high winds were bucking palm trees. Minor damage to roofs was reported but there was no flooding yet or reports of injuries.

On Tuesday and Wednesday Matthew, the strongest hurricane in the Caribbean since Felix struck Central America in 2007, had whipped Cuba and Haiti with 140 mph (225 kph) winds and torrential rain, pummeling towns and destroying livestock, crops and homes. The devastation in Haiti prompted authorities to postpone a presidential election.

The last major hurricane, classified as a storm bearing sustained winds of more than 110 mph (177 kph), to hit the United States was Hurricane Wilma in 2005.

In Florida, fuel stations posted "out of gas" signs after cars waited in long lines to fill up.

At a Subco gas station in Orlando, the central Florida city that is home to resorts including Walt Disney World , the gas pumps had run dry on Wednesday afternoon.

"We were selling 800, 1,000 gallons of gas an hour. That's huge," said Nancy, who was working the counter on Thursday morning and declined to give her last name.

The shop was a stopping off point for coastal residents seeking shelter inland from the coast. Among them was Jonas Sylvan, 44, of Melbourne, Florida, who planned to hole up in a hotel with his wife, two daughters and dog. "We're just trying to get away from the coast," he said. "It's safer here."

In South Carolina, Tylisia Brooks, 44, who has lived on the barrier island of James Island near Charleston for six years, waited with her 8-year-old son and mother at a closed Walmart early Thursday for a school bus to take them to a hurricane shelter.

"We're from New York City," she said. "We've never been through a storm like this where we had to evacuate.