WATCH LIVE: Florida braces for Hurricane Matthew -- 'Be where you need to be by 5pm today' 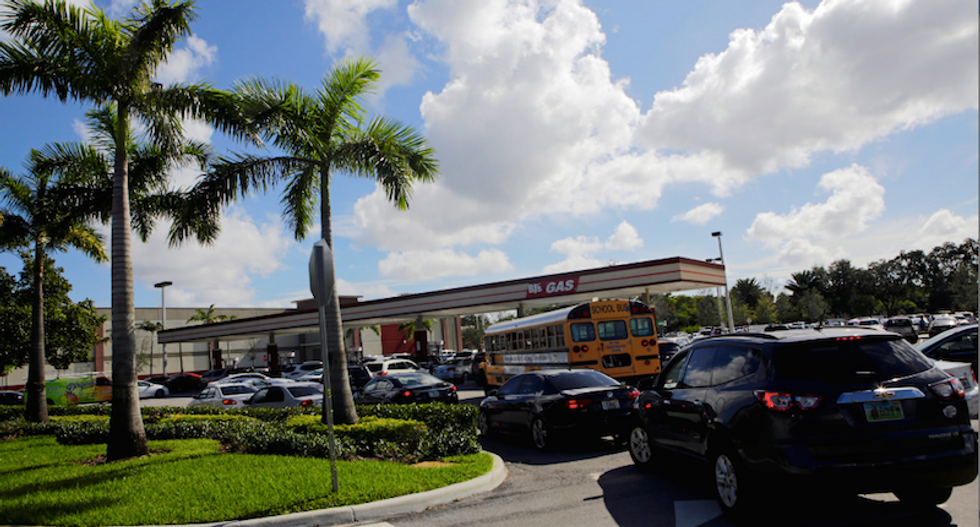 People line up to fill their cars with gas in anticipation of Hurricane Matthew, in Coral Springs, Florida, U.S. October 5, 2016. (REUTERS/Henry Romero)

The fiercest Caribbean storm in nearly a decade slammed into the Bahamas early on Thursday, intensifying as it barreled toward the southeast U.S. coast where millions of residents heeded warnings to flee inland.

Roadways in Florida, Georgia and North and South Carolina were jammed and gas stations and food stores ran out of supplies as Hurricane Matthew approached, packing storm surges, heavy rain and sustained winds that accelerated overnight to around 125 miles (205 km) per hour.

Matthew, which killed at least 26 people and damaged swathes of homes in southern Haiti, was predicted to strengthen from a Category 3 to 4 storm en route to eastern Florida.

"Everyone in our state must prepare now for a direct hit," Florida Governor Scott told a news conference in Tallahassee on Wednesday. "If Matthew directly impacts Florida, the destruction could be catastrophic and you need to be prepared."

The four states in the path of the hurricane, tracked 255 miles (410 km) southeast of West Palm Beach, declared states of emergency enabling their governors to mobilize the National Guard.

Shelters in Florida, Georgia and South Carolina opened their doors after authorities, along with President Barack Obama, urged locals to evacuate their homes.

Scott requested that Obama declare a pre-landfall emergency for Florida, which would bring resources including as food, water and waterproof coverings and double the active National Guard force to 3,000.

Schools and airports across the region were to close on Thursday and some hospitals evacuated patients, according to local media. Hundreds of flights were canceled in and out of Miami, Fort Lauderdale and Orlando, Florida, industry website Flightaware.com said early on Thursday.

In all, more than 12 million U.S. residents were under a hurricane watches and warnings, according to the Weather Channel.

In Florida, fuel stations posted "out of gas" signs after cars waited in long lines to fill up.

Others, meanwhile, prepared to wait out the storm.

Residents and business owners boarded up windows with plywood and hurricane shutters and placed sandbags down to protect property against flooding.

"All boarded up and ready to bunker down. God be with us," West Palm Beach Florida resident Brad Gray said in a Tweet.

The National Hurricane Center said it was still too soon to predict where in the United States Matthew was likely to do the most damage.

Matthew is the strongest hurricane in the Caribbean since Felix struck in 2007.

On Tuesday and Wednesday it whipped Cuba and Haiti with 140 mile-per-hour winds and torrential rain, pummeling towns and destroying livestock, crops and homes.

The devastation in Haiti prompted authorities to postpone a presidential election.