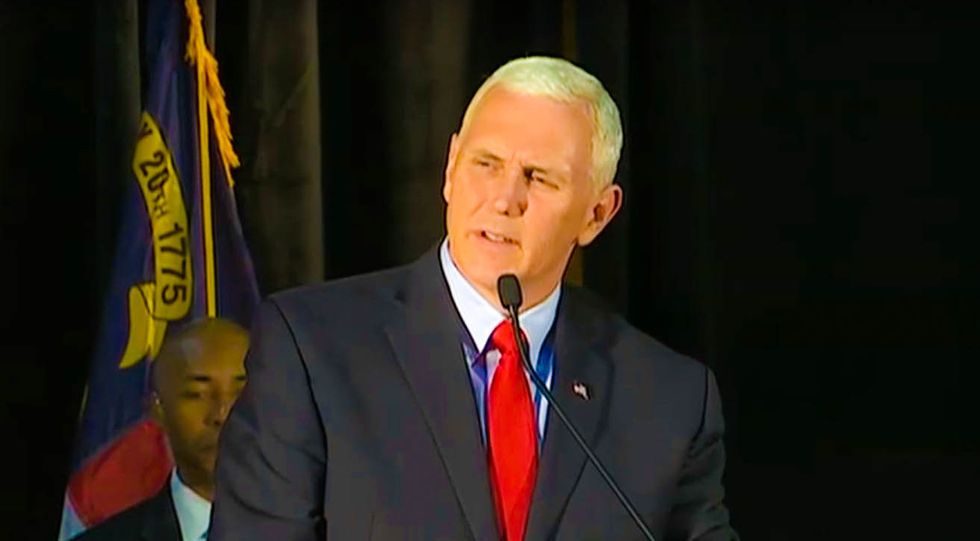 Gov. Mike Pence talks about how Jesus would want him to forgive Donald Trump (Screen cap).

After some reported wavering over the weekend, Republican vice-presidential nominee Mike Pence is back on the Trump Train -- and he's apparently bringing a higher power with him.

Speaking at a campaign event in North Carolina on Monday, Pence talked about how his Christian faith has taught him to forgive people such as Donald Trump when they err, as Trump did when he talked about grabbing women "by the pussy" in a leaked tape.

"My faith informs me that we're to hold up a Godly standard," Pence said. "But it also informs me that we all fall short. We all fall short of the glory of God. There's no one righteous, other than The One. As I said last weekend, I don't condone what was said, and I spoke out against it. But the other part of my faith is I believe in grace. I've received it. I've believed in it... Last night, my running mate, he showed the American people what was in his heart."

Apparently, Trump's "heart" told him to hold a press conference with women who in the past have accused former President Bill Clinton of sexual harassment or assault, but Pence didn't bring this up. Instead, he talked about the part of Trump's "heart" that said he apologized.

"He showed humility to the American people," Pence said. "And then he fought back and turned the focus to the choice that we face, and I am proud to stand with Donald Trump."