When Mexico needed a wall to keep Americans out 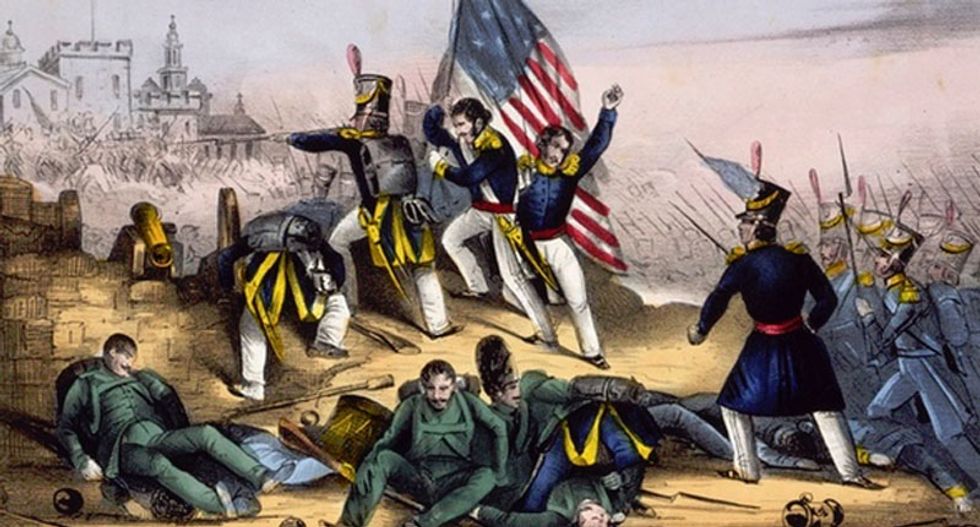 Attack on Chapultepec, Sept. 13th 1847 when Mexicans were routed with great loss

When the image of the border-crossing Mexican rapist emerged from Donald Trump’s fevered imagination at the start of this election cycle, it struck a surprisingly resonant chord with the electorate. Since then, xenophobic appeals have been at the heart of the Republican candidate’s campaign. Yet well before provocateurs like Trump and Anne Coulter began spinning stories about criminal Latino immigrants coming up from the south, it was Mexicans who very rightly fretted about American immigrants streaming down from the north.

When Mexico won its independence from Spain in 1821, it was the largest nation in North America. But three decades later, it had lost over half of its landmass. The events that culminated in that dramatic territorial reduction were set in motion by American border-crossers.

Anglo-American immigrants began arriving in the state of Coahuila y Tejas in the early 1820s, at the invitation the Mexican government. Mexico’s policymakers had hoped that a fresh influx of settlers would help secure the nation’s sparsely populated northern frontier, which had been at the mercy of powerful Indian tribes for years.

A majority of those Anglo settlers – who would become known as Texians – came from the American South, many of whom carried their black slaves with them. Mexico’s prohibition on slavery, passed in 1829, hardly stemmed this tide of slaveholding southern immigrants. Nor did a state-imposed moratorium on further American immigration, instituted a year later. By 1834, some 30,000 white immigrants had settled in Coahuila y Texas, compared to fewer than 8,000 Mexican-born residents.

The prohibitions on slavery and immigration only deepened the Anglo settlers’ distrust of the Mexican government. And by 1835, they were in a state of open revolt against the centralist administration of Santa Anna. At first, the Texian rebels found common cause with the Mexican-born Tejanos of the region, who nurtured longstanding grievances against the central government, which had historically ignored their appeals for greater military protection and broader legislative representation. The initial aim of the rebellion was merely to break Santa Anna’s dictatorship and to restore power to the state governments, rather than outright independence.

But as Santa Anna’s depredations mounted and Texian resistance stiffened, it soon became clear that the rebels would accept nothing less than a complete break with Mexico. When they routed and captured Santa Anna at the battle of San Jacinto, Texians insisted on full independence in exchange for his release. From there, they moved quickly to consolidate Anglo-American control over the new Republic of Texas.

Their constitution, drafted in 1836, explicitly denied citizenship to “Africans, the descendants of Africans, and Indians.” The document also legally enshrined slavery, prohibited emancipation without the prior consent of Congress, and banned free blacks from Texas. This was to be a proslavery, white man’s republic. Former immigrants had become the masters of North America’s newest nation.

After nearly a decade of political wrangling, the U.S. Congress finally approved the annexation of slaveholding Texas in late 1845. Mexico, however, still claimed Texas for itself, and the pro-annexationist president James K. Polk exploited territorial disputes over the region to ignite a war with America’s southern neighbor a year later.

Polk insisted that the war with Mexico was one of self-defense. But Whig congressmen, like the young Abraham Lincoln (and indeed most historians since), have recognized it as little more than a bald land-grab. When the dust had settled and the gunpowder cleared, the U.S. laid claim to a vast new territorial domain. Under the terms of the Treaty of Guadalupe Hidalgo of 1848, the U.S. seized from Mexico over half a million square miles, encompassing the present-day states of California, Utah, Nevada, most of Arizona and New Mexico, and portions of Colorado and Wyoming.

The history of Anglo-American incursions into Mexico does not end here, however. Immediately after the Civil War, unreconstructed Confederates looked to Mexico as a potential haven from the post-emancipation political order of the South. Over the next several years an estimated 5,000 former rebels moved across the border, and in the process triggered violent confrontations with Native American tribes and Mexican residents.

These American southerners had been encouraged to migrate by the newly installed Emperor Maximilian, a puppet of the French regime in Mexico. The French had overthrown the administration of President Benito Juarez and installed Maximilian on the new imperial throne in 1864. When former Confederates began arriving two years later, they soon clashed with some of Juarez’s forces, which were engaged in a campaign to oust the French (and American) invaders and to restore Mexico’s sovereignty.

After years of fierce resistance, the Juarez Liberals toppled Maximilian’s regime, and by the spring of 1867, the deposed emperor faced a Mexican firing squad. Subsequently, American migration slowed to a trickle, although Confederate exile communities did not disband altogether. For many Mexicans, these lingering Anglos served as a reminder of a time when their nation was not their own.

And for us today, they should serve as a counter-narrative to the poisonous plotline that remains at the center of the Republican candidate’s campaign. The United States has been forfeited to outsiders, Trump continues to thunder, in spite of solid evidence to the contrary. According to the Trump fiction, immigration moves only in one direction: into the U.S. And it brings with it the world’s undesirables.

But at two critical junctures in North American history, the undesirables were American border-crossers – and they moved in the opposite direction. As a result, it was Mexico – Trump’s bogeyman of choice – that lost much of its territory and occasionally its sovereignty to outsiders.

If Mexico had somehow managed to keep these Anglos on the other side of the border, it might occupy a much larger share of the North American map today. Perhaps one day, not so far from now, a Trumpian mirror-image will emerge to the south, with promises to make Mexico great again. The nostalgia of such a campaign would certainly have a firmer historical foundation.

Kevin Waite teaches American political history at Durham University (UK). His ongoing book project explores slaveholding visions of empire in the Pacific world and the expansion of a Southern political agenda across the American West during the Civil War era.