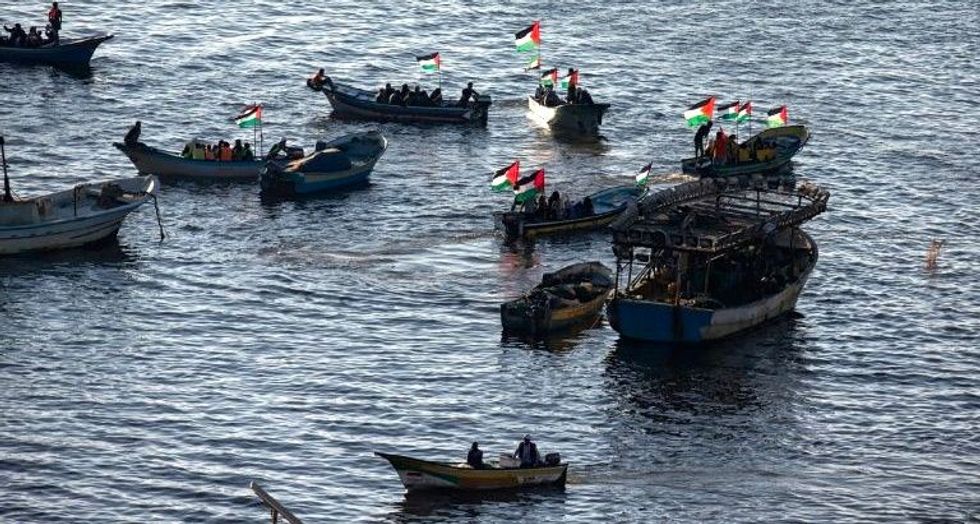 Palestinians sail boats in the port of Gaza City in support of the Gaza-bound flotilla of international female activists attempting to break the Israeli blockade on the Gaza Strip on October 5, 2016

A group of women activists who tried to break Israel's decade-long blockade of the Gaza Strip were being held Thursday pending deportation after the Israeli navy intercepted their boat.

Thirteen women, including Nobel Peace Prize winner Mairead Maguire, were detained on Wednesday evening after their sailboat was stopped around 35 nautical miles off the coast of Gaza.

The Israeli navy said it stopped them to prevent a "breach of the lawful maritime blockade" of the Palestinian enclave.

Ministry of Interior spokeswoman Sabin Haddad said two of the women, both journalists, had already left prison for the airport but the others were being held in the Givon prison in central Israel for up to four days before being deported.

"During these 96 hours they can see a judge to appeal their detention," she added.

The Zaytouna-Oliva set sail from Barcelona in September with women of various nationalities aboard including Maguire, who won the Nobel Peace Prize in 1976 for her peace efforts in Northern Ireland.

Dubbed "Women's Boat to Gaza", the boat was part of the wider Freedom Flotilla Coalition that consists of pro-Palestinian boats that regularly seek to go to Gaza to try to break the blockade.

One such operation turned to tragedy in 2010 when Israeli commandos killed 10 Turkish activists in a raid on a flotilla.

"We are very disappointed for Gazans who were waiting for us, but we will continue. As long as there is a blockade, there will be flotillas," Claude Leostic, spokeswoman for the flotilla movement who herself attempted to sail to Gaza in 2011, told AFP.

She said they had had no contact with the women since the boat was stopped, "but when I myself was arrested in 2011, we were placed in detention centres and interrogated by intelligence services."

Gaza-based organiser Adham Abu Salmiyeh said in a statement he wanted the women to visit "Gaza to brief them on the deteriorating humanitarian situation after 10 years of blockade and collective punishment."

But he said they were confident they had sent a message to the world.

The Israeli navy said it had intercepted the sailboat after advising it "numerous times to change course prior to the action".

It said its forces had boarded and searched the sailboat, describing the operation as "uneventful".

The vessel was then taken to the Israeli port of Ashdod, about 30 kilometres (18 miles) north of Gaza.

Saeb Erekat, secretary general of the Palestine Liberation Organisation, condemned the interception of the boat, while Islamist movement Hamas -- which runs Gaza -- called it "state terrorism."

"We strongly condemn the Israeli aggression against the international flotilla that tried to break the illegal siege imposed by Israel on 1.8 million inhabitants of the Gaza Strip," Erekat said in a statement calling for their release.

Israel and Palestinian militants in Gaza have fought three wars since 2008.

Israel maintains a blockade to keep material it believes could be used for military purposes from entering the enclave.

UN officials have called for the blockade to be lifted, saying conditions are deteriorating in impoverished Gaza.

Hamas is considered a terrorist organisation by Israel, the United States and the European Union.

Also on Wednesday, Israel's military struck several Hamas positions in the Gaza Strip after a rocket launched from the Palestinian enclave hit the nearby Israeli city of Sderot, with no casualties reported on either side.

A small Salafist group -- followers of an ultra-conservative brand of Sunni Islam who oppose Hamas -- claimed responsibility for the attack.

Israel holds Hamas responsible for all such rocket fire and often responds with air and tank strikes, but recent responses have been stronger than in the past.