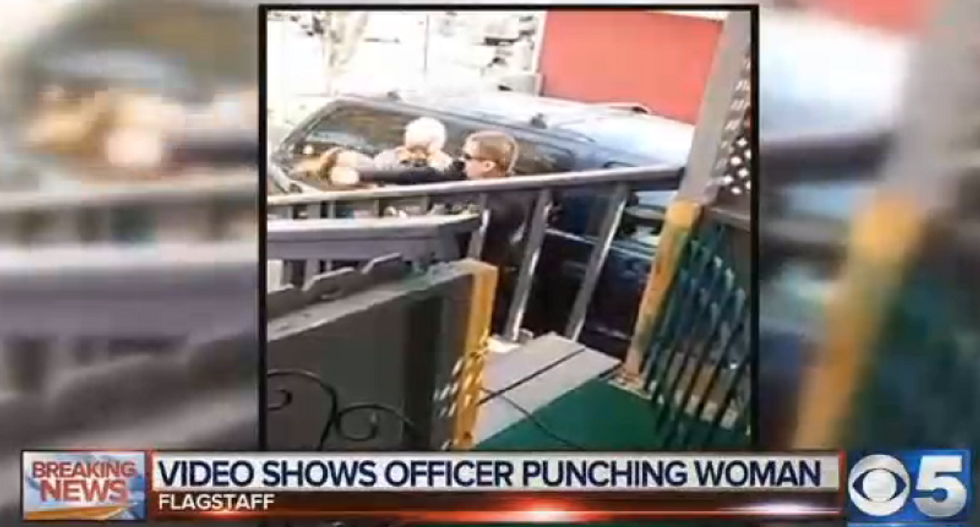 An Arizona police officer caught on video punching a woman in her face was put on administrative leave and investigations were underway, the Flagstaff police chief said on Thursday.

"I am as concerned with what is depicted in this video as I know others are," Police Chief Kevin Treadway told a news conference. "I have heard your concerns and the department is taking this incident very seriously."

He said separate internal and criminal investigations had been launched into the Wednesday confrontation between Flagstaff Police Officer Jeff Bonar and Marissa Morris.

Police became aware of the incident after the video surfaced on social media on Wednesday, he said.

Bonar, who has been with the Flagstaff Police Department for less than three years, will be on administrative leave until the investigations have been completed, Treadway said.

Police said Bonar was assisting a county sheriff’s deputy with an eviction at residence at about 11 a.m. local time when he recognized Morris, whom he believed had outstanding warrants against her.

He said the warrants for failing to appear in court on charges of driving under the influence and resisting arrest had already been served and were no longer valid.

The video posted on Facebook showed Bonar, Morris and a deputy near a house, and Morris arguing that she did not have an active warrant. Bonar is seen punching her in the face.

“Hey, hey, you can’t hit a girl like that,” a man is heard saying in the background.

She was ushered into a police car.

Treadway said Bonar wrote in the incident report that Morris had kicked and kneed him in the groin before he hit her.

The Arizona Republic reported that the video was recorded by the brother-in-law of Morris’ boyfriend.

According to the newspaper story, her boyfriend Jimmy Sedillo said the couple had until Wednesday to comply with an eviction order and that they were preparing to do so when Bonar spotted Morris and the argument ensued.

He said his children, aged 3 and 9, mother, niece and brother-in-law Danny Paredes witnessed Morris being hit and tackled.

“It was just shocking," the newspaper quoted Paredes as saying. “I pulled out my camera immediately.”

Treadway said the family had yet not been in contact with the police department.