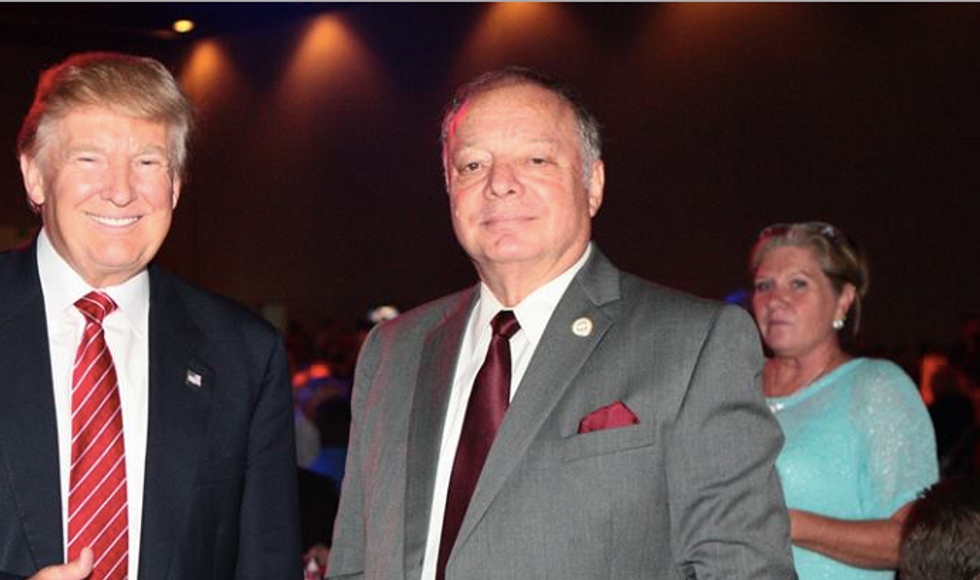 A Republican election commissioner in Arkansas has been accused of voter intimidation after he harassed early voters and tried to drive them away from a polling location in Pine Bluff.

Arkansas Online reported Friday that Jefferson County Clerk Patricia Johnson and Pine Bluff resident Victor Johnson -- no relation -- have accused election commissioner and designated poll watcher Stu Soffer of voter intimidation after he stood in the doorway of an early voting location and shouted at voters to "shut up and go home."

Soffer -- who made headlines earlier this year when he brandished a gun during a meeting of the Jefferson County Election Commission -- applied to be a poll watcher on Oct. 18 and, according to the attorney representing Victor Johnson, "interfered with and intimidated voters" at the Jefferson County Courthouse on Oct. 24.

"Mr. Soffer stood in the doorway of the early-voting location and told voters to shut up and go home," said attorney Chris Burks. "This is deeply troubling to the voters of Jefferson County and also to the election administrators whose job it is to administer the elections free of fear and intimidation."

Soffer declined to comment to Arkansas Online, but indicated that the Jefferson County Republican Party's attorney George Ritter would speak for him. Ritter is a co-defendant in the suit filed by Burks.

Burks filed for an expedited hearing on the matter, but Circuit Court Judge Jodi Dennis has yet to set a hearing.

According to the suit, Johnson went to vote at the Jefferson County Courthouse at around 1 p.m. on Oct. 24. While waiting in line, he observed Soffer and a TV reporting crew entering the courthouse.

Soffer and another man were corralling voters to be interviewed by the camera crew. Johnson and former Election Commissioner Ted Davis alerted poll officials that the camera crew and reporters were causing a disturbance inside the polling place.

A county sheriff ordered the man with Soffer to leave, but Soffer -- claiming credentials as a poll watcher -- blocked the door leading to voting booths and shouted at the gathered voters to "shut up and go home."

"As a result of the disruption and confusion caused by Stu Soffer and other Republicans -- I was not able to cast my ballot that day," said Victor Johnson in the lawsuit.

Arkansas Republican Party chairman Doyle Webb dismissed the suit as unnecessary. Soffer resigned from his position as a poll watcher in the wake of the incident.

"We believe this matter is moot and their action was unnecessary," said Webb. "The poll watcher authorization was surrendered last week by Mr. Soffer."

Burks and many Arkansas Democrats want Soffer removed from the country election commission, however, the latest flap is just the most recent in a long list of complaints involving the 74-year-old Republican.

After Soffer brandished a loaded gun at a meeting in April, Democrats have tried to have him removed from the election commission. Webb appointed Soffer to a second 4-year term on the commission in June.

Burks said that he doesn't know how many people were kept from voting on Oct. 24.

"We don't think it's too many," he said. "We think that we caught and stopped this soon after it happened, but it is deeply concerning to us that voters were challenged."

Soffer's actions are in violation of Arkansas Code Annotated 7-4-109, which prevents election commissioners from engaging in partisan activity. Burke said that when Soffer "challenges voters as he did last Monday or prevents them from voting or forces them to vote a provisional ballot, he is in effect acting as a partisan benefiting certain campaigns."

"But this is not about one individual," the attorney said. "It's about the principle that when you count votes, you should not also be challenging votes."