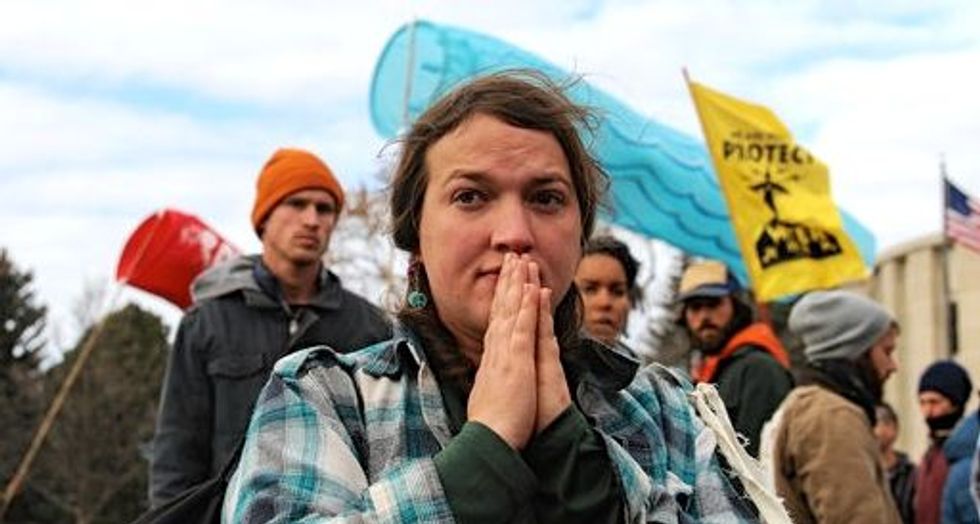 A woman prays in front of the North Dakota State Capitol building during a protest in Bismarck against plans to pass the Dakota Access pipeline under Lake Oahe and near the Standing Rock Indian Reservation, North Dakota, U.S. November 14, 2016. REUTERS/Stephanie Keith

Federal authorities deferred a final decision on a controversial North Dakota section of the Dakota Access Pipeline on Monday in a statement that highlighted concerns about the "repeated" dispossession of tribal lands in the country's past.

The Departments of the Army and Interior, in a joint statement, said that while their previous decisions to grant construction were consistent with legal requirements, they wanted to have additional discussions due to concerns about protecting Lake Oahe, a sensitive federally owned water source.

The $3.7 billion Dakota Access construction project has drawn steady opposition since last summer from the Standing Rock Sioux tribe, along with environmental activists, who claim it could pollute nearby water supplies and destroy sacred historical sites.

Most of the construction of the proposed 1,172-mile (1,885 km) line, which will stretch from North Dakota to Illinois, has been completed. However, Energy Transfer Partners LP, which is building the line, has yet to receive approval for an easement to tunnel under Lake Oahe, which is part of the Missouri River and is adjacent to the Standing Rock Sioux Nation.

Demonstrations continued on Monday as more than 500 Dakota Access Pipeline protesters tried to gain entry to the capitol in Bismarck. Officials put the building in a "soft lockdown," in which all doors were locked and guarded, at 11:30 a.m. CST (1830 GMT), said Lieutenant Tom Iverson, spokesman for the Highway Patrol.

Employees were given the option of going home and told they could return only with key cards, Iverson said, adding that more than 30 state highway patrol officers were deployed to the building.

Completion of the pipeline was delayed in September so federal authorities could re-examine permits required by the Army Corps of Engineers.

In its statement, the Army said that its previous decisions "comported with legal requirements." However, it added that it was "mindful of the history of the Great Sioux Nation's repeated dispossessions, including those to support water-resources projects."

It said its additional analysis and discussion with the tribe will include conditions in an easement for the pipeline crossing that might reduce the risk of spills, along with an assessment of how such a spill could affect the tribe.

"This delay provides an opportunity for the U.S. government to resolve outstanding issues to the full satisfaction of the Standing Rock Sioux Tribe and end this pipeline project," said Amanda Starbuck, climate and energy program director at the Rainforest Action Network, an environmental group.

Shares of ETP dipped about 1 percent in after-hours trading. Officials at Energy Transfer Partners were not immediately available for comment.

The line has been billed as a cost-effective and efficient way to bring North Dakota oil through Illinois, en route to the Gulf of Mexico.

It is unclear how long the review will take.

The Obama Administration has been supportive in the past of the protection of tribal lands. President-elect Donald Trump has voiced support for infrastructure projects, including pipelines, though he has not specifically addressed Dakota Access.

The MAIN Coalition, which represents groups that support the pipeline, called Monday's action another "attempt at death by delay" of the pipeline, saying the administration "has chosen to further fan the flames of protest by more inaction."

With Trump's inauguration a little more than two months away, they said they hoped "this is not the final word on the Dakota Access Pipeline."

Protests were a factor in the Obama administration's decision to delay the line's completion in September and ask for further review from the U.S. Army.

The highway patrol's Iverson said a convoy of 140 vehicles entered the capitol grounds in Bismarck. The protesters lacked a permit, required by state law for people to assemble inside the capitol.

There were no arrests or physical altercations, and a few hours later the protesters marched toward the federal courthouse, Iverson said. However, the demonstrators broke into smaller groups and attempted to gain entry to the capitol through various side entrances, he said.

Officials with the Standing Rock Sioux were not immediately available for comment.