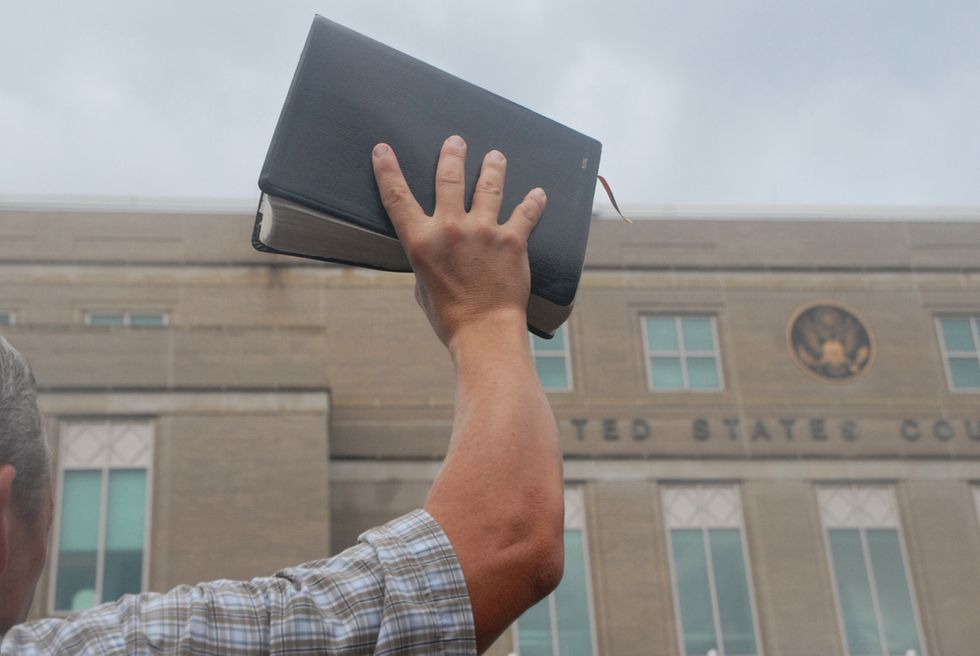 Protesters in Pensacola support highschool educators on September 17, 2009. The educators are on federal trial following the ACLU charge that they prayed in school (Cheryl Casey / Shutterstock.com)

The San Diego Union-Tribune reports that the Immaculate Conception Catholic Church, which is located in the Old Town neighborhood of San Diego and that will be a polling place on election day, distributed a weekly newsletter in mid-October that had a flier inserted in it that told parishioners they'd go to hell if they voted for Democrats.

"It is a mortal sin to vote Democrat," read the flier. "Immediately after death the souls of those who die in a state of mortal sin descend into hell."

Two weeks later, another flier was stuffed into a church bulletin that claimed Hillary Clinton was using the tactics of organizer Saul Alinsky to do Satan's bidding.

"The devil does this through tactics outlined by Saul Alinsky," it read. "As Hillary Clinton stated, 'And deep-seated cultural codes, religious beliefs and structural biases have to be changed,' to draw us away from God’s teachings regarding the sanctity of life to those of the world and its prince."

The church claims that it did not insert the fliers into its weekly bulletins and said that they were not authorized.

“For all I know someone thought that they were doing a service," diocese spokesman Kevin Eckery said of the flier. "The pastor said it was not something he had reviewed or approved."