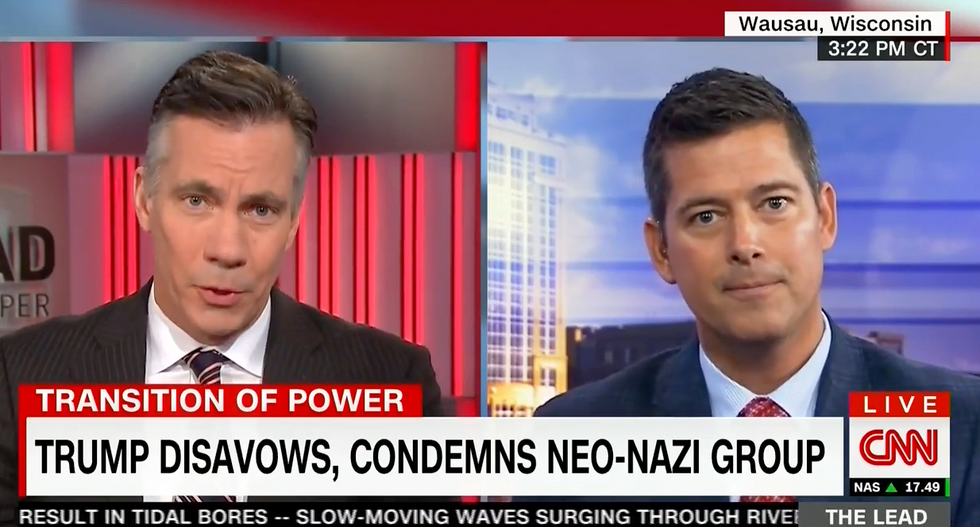 Responding to Scuitto’s question about why it too “so long” for Trump to “condemn this really disgusting hate group,” Duffy pivoted to complaining about mounting protests against the impending Trump administration.

“He did condemn them and that’s a good thing,” Duffy said adding it was the “right move” and shows Trump’s leadership skills. “My concern is that Barack Obama, when he had a chance, didn’t condemn the riots across America that were in protest of Donald Trump’s victory in the election or didn’t condemn Black Lives Matter,” the representative added.

“You’re equating Americans protesting a politician with outright the and bigotry from a group that was using the Hitler salute to celebrate Donald Trump’s victory and are nothing more than white supremacists?” Scuitto asked. “That’s not a fair comparison.”

“No, no, no. Both are disgusting, for different ways,” Duffy replied.

“Let me explain to you, let me explain,” Duffy said, insisting he thinks white supremacists are “a horrible group,” but the protestors “damaging property” and perpetuating “violence on American streets.”

Scuitto continued pressing the Republican representative about his comparison, arguing the protests are “something completely different.”

“I don’t equate one group with the other,” Duffy argued. “I’m just giving an example of two groups who should be condemned.”

Yesterday, The Lead came under fire for an anti-Semitic chyron that read, "Alt-right founder questions whether Jews are people." Host Jake Tapper, who was off for Thanksgiving, called the wording "unacceptable."