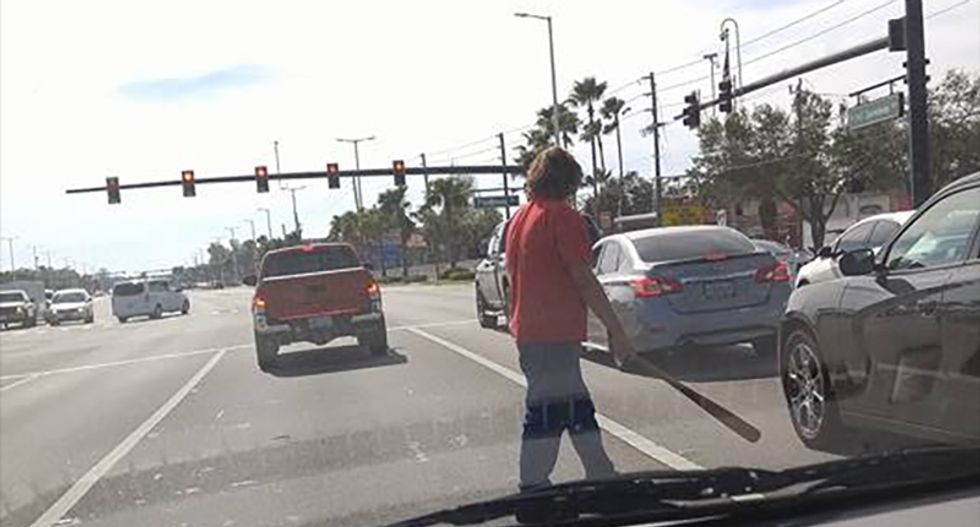 "I witnessed and recorded this attack on Nov. 11 and posted on Facebook," he told Raw Story via email. "Two other Facebook users came out with similar accounts involving the same truck and same white guy."

The video posted shows the truck driving fast and swerving through traffic. "This morning on my way back from Daytona Beach I witnessed something very disturbing," Jenner described in his Facebook post. "A pickup truck covered with Trump bumper stickers, flying a large confederate flag weaving in traffic."

He said that the truck was chasing after a black couple. Both vehicles stopped and Jenner stopped between them. "The black passenger of the vehicle being chased opened the door and told the white passenger, who had jumped out of the truck and was charging toward the car [with] a wrench in his hand 'hey man you're tripping, calm down.' The car left and the truck continued the chase."

He said that they only stopped after they realized he was following them and videotaping the incident.

After passing 20,000 views on the video, Jenner said that the man called him and threatened him to take down the post. "I refused and he filed a complaint with the Holly Hill Police Dept, against me," he said.

Later that day, in Daytona Beach, DeeJae DuRante posted photos and videos of a similar experience with the man in the same truck. As you can see from the video below, the man gets out of a truck with a bat and seems to be shouting at someone also stopped in a car at the stop-light.

"I did not notice anything to perpetuate this from the car," DuRante said on Facebook. "The car ended up changing lanes to the far right and the guy still jumped out across my lane. This continued for a few blocks in front of the Speedway."

A few hours later, Rodney C. Miller posted a screen capture of an individual who also saw the man and didn't want to be identified.

"I saw the same idiot with a wooden bat in his hands running behind three younger black boys that were on their bicycles," the post says. "They were children around 10-12 or so. After he couldn't catch up to them, he walked back to the gas station to this same truck that is in these pics. there was also a girl with long straight dark hair with him standing there laughing as she watched him. He had on jeans and a red shirt."

Jenner said that when he called police he was informed nothing could be done until a victim came forward to file charges.