Cubans fret about life after Castro with Trump next door 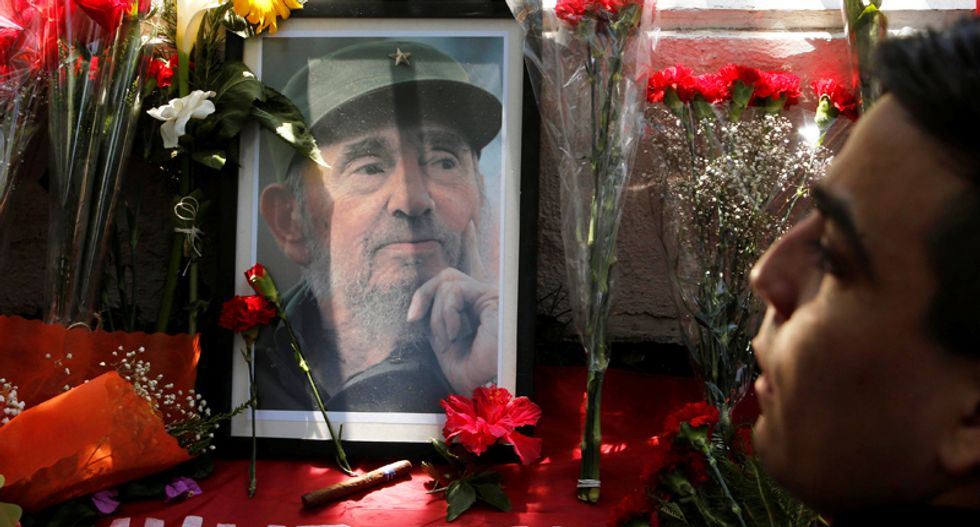 A picture of the late Cuban revolutionary leader Fidel Castro is on display outside the Cuban embassy in Chile, in Santiago, November 26, 2016. REUTERS/Carlos Vera

From the Bay of Pigs invasion to a historic visit by President Barack Obama to Havana, Cubans have known for generations that whenever the United States turns its face to Cuba, Fidel Castro would be staring right back.

But the death of "El Comandante" has added to worries among Cubans that U.S. President-Elect Donald Trump will slam the door shut on nascent trade and travel ties, undoing two years of detente between the estranged neighbors.

Trump has struck a very different tone from Obama, who reached an agreement two years ago with Castro's younger brother President Raul Castro to end half a century of hostilities.

Late in his election campaign, Trump sought to reassure the Cuban-American vote in Florida that he was firm in his opposition to the Castros, and pledged that, if elected, he would close down the newly re-opened U.S. embassy in Havana.

Earlier on, in the primaries, he said he thought restoring diplomatic ties with Cuba was fine, but that Obama ought to have cut a better deal.

Having won the presidency, it is hard to know what Trump's approach to Cuba will be.

After the 90-year-old Castro's death, Obama called him a "singular figure," while Trump described the bearded communist revolutionary as a "brutal dictator."

Castro began his career as a revolutionary by toppling a U.S.-backed government, repelled a CIA-backed counter-revolutionary invasion at the Bay of Pigs in 1961, and faced off against President John F. Kennedy in the Cuban missile crisis a year later.

During 49 years in office, he crossed swords with ten U.S. presidents. And while he took a lower profile after officially retiring in 2008, Castro never stopped warning Cubans that the American government was not to be trusted.

His younger brother never gave much ground to the Obama administration in terms of liberalizing Cuba's one party political system.

But many Cubans reckon they could do with their late leader's charisma and way with words to counter Trump's bombast.

"With 'El Comandante' gone, I am a little fearful of what could happen because of Trump's way of thinking and acting," said Yaneisi Lara, a 36-year-old Havana street vendor and flower seller.

"He could set back and block everything that's been going on, all the things Obama has done, and he did a lot, managing to get the U.S. closer to Cuba," she said, admitting she would consider moving to the United States herself.

Obama did not succeed in convincing Congress to lift the United States' tough economic embargo on Cuba, but he personally opposed the sanctions and used executive action to allow more contact and commerce.

The first U.S. commercial flight to Havana in about half a century is due to arrive on Monday.

Trump could easily review such measures. He has not been clear on his position, but has included Mauricio Claver-Carone, a leading advocate for maintaining a tough economic embargo, in his transition team.

Without giving any specifics, Trump said on Saturday that his administration would "do all it can" once he takes office on Jan. 20 to help increase freedom and prosperity for Cuban people after the death Castro.

"Trump is the polar opposite of Obama," said burly Havana taxi driver Pablo Fernandez Martinez, 39, as he hustled for work.

Life in Cuba remains hard for its educated but underemployed people, but engagement with the United States has brought in more dollars. Martinez fears that could dry up once Trump moves into the White House.

"There will probably be less tourist traffic. That will affect everyone in Cuba, and hit the economy," said the father-of-one, who earns $100-$120 a week driving for foreigners.

Pedro Machado, 68, is a retired engineer in marine research who now rents out rooms in his airy apartment near Havana's "Malecon" seafront. Watching television with his wife, Machado is worried that Trump's angry rhetoric could spell trouble.

"Trump's policies are very aggressive. We'll have to see what he actually does. But it certainly looks like bad news for Latin America and for Cuba in particular," he said.

"My generation benefited from Fidel's revolution, in terms of education, the poor were helped. Not everything was a bed of roses, but Fidel helped us," he added "The United States has acted as an empire, and that's what Trump represents. Given what he has said, the future is not looking great."