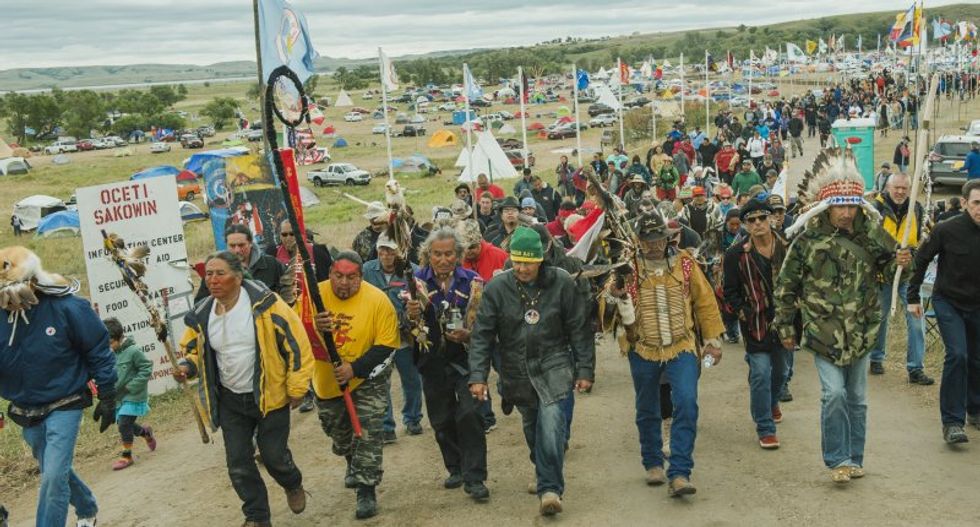 Demonstrators across U.S. cities will gather outside offices of the Army Corps of Engineers, banks and energy companies on Tuesday in the largest protest against the Dakota Access Pipeline since the U.S. government halted the project in September.

More than 200 protests are set to take place in a "Day of Action" called for by indigenous leaders in support of the Standing Rock Sioux tribe and in an effort to urge the Army Corps of Engineers and U.S. government to stop the pipeline, according to Dallas Goldtooth, a spokesman for Indigenous Environmental Network, one of the organizers.

The $3.7 billion Dakota Access project has drawn steady opposition since last summer from the tribe, along with environmental activists, who claim it could pollute nearby water supplies and destroy sacred historical sites.

"The purpose is to elevate the issue and to encourage the Army Corps to exert its power to stop this pipeline," Goldtooth said of Tuesday's protests in which more than 30 groups, including Greenpeace and CREDO Action, are participating.

The Army Corps and Department of Interior on Monday delayed a decision on whether to grant an easement to Energy Transfer Partners, the main company behind the pipeline, for an easement to tunnel under Lake Oahe, the water source that is the focus of protests.

Construction of the 1,172-mile (1,885-km) pipeline is about 85 percent complete, Phillips 66, one of the pipeline's investors, said last week. The only outstanding construction work to be done in North Dakota is the segment of the line that would run under the lake, Energy Transfer said last week.

Energy Transfer has said the pipeline would be a more efficient and safer way to transport oil from the Bakken shale of North Dakota to the Midwest and onto the U.S. Gulf Coast. The company last week said it was confident the Army Corps would grant the easement, allowing it to begin drilling under the lake about two weeks later.

Tuesday's protests will be focused outside Army Corps offices throughout the country, and at major banks financing construction of the pipeline. Norwegian bank DNB this month said it would reconsider financing the project if the concerns of the Standing Rock Sioux were not addressed. In Houston, Texas, demonstrators will gather outside Energy Transfer Partners' office.

Although the protests were planned in advance of the November presidential election, they come as groups opposed to the Dakota Access line could face headwinds following the election of Republican Donald Trump.

While the president-elect has not weighed in on the Dakota Access specifically, he has expressed strong support for development of energy infrastructure projects, including oil pipelines.

Kelcy Warren, the top executive at Energy Transfer, donated more than $100,000 to the Trump campaign.