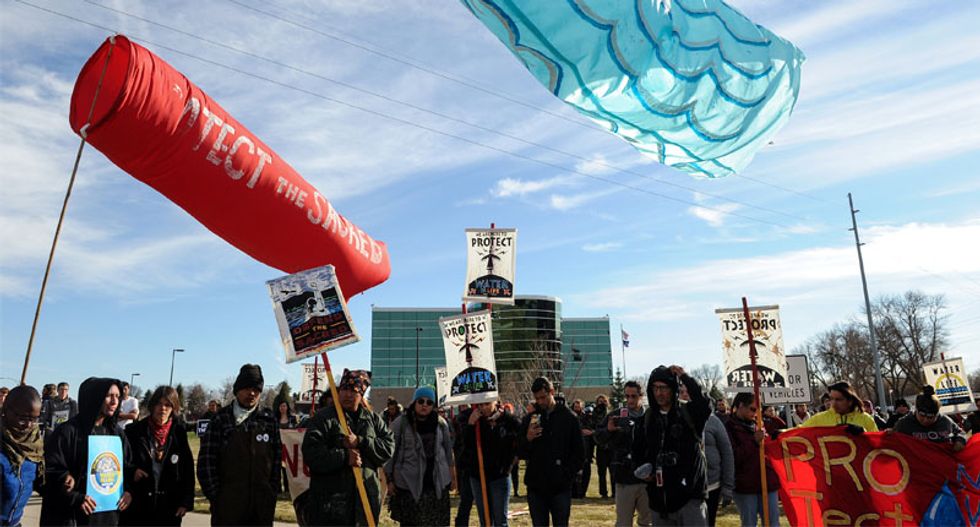 Protesters gather in front of the Bank of North Dakota in Bismarck during a protest against plans to pass the Dakota Access pipeline near the Standing Rock Indian Reservation, North Dakota, U.S. November 16, 2016. REUTERS/Stephanie Keith

The company behind the controversial Dakota Access crude pipeline will seek to complete the project even if protests against its construction continue, its chief executive told the PBS NewsHour television news program late on Wednesday.

"This is not a peaceful protest," said Kelcy Warren of Energy Transfer Partners. "If they want to stick around and continue to do what they’re doing, great, but we’re building the pipeline."

Dakota Access, halted by the federal government in September after protests, has drawn opposition from the Native American Standing Rock Sioux tribe and environmentalists who say it could pollute water supplies and destroy sacred historic tribal sites.

Demonstrators fanned out across North America on Tuesday to demand that the U.S. government either halts or reroutes the pipeline, while Energy Transfer asked a federal court for permission to complete it.

Energy Transfer has said the pipeline would be a more efficient and safer way to transport oil from the Bakken shale of North Dakota to the Midwest and onto the U.S. Gulf Coast.