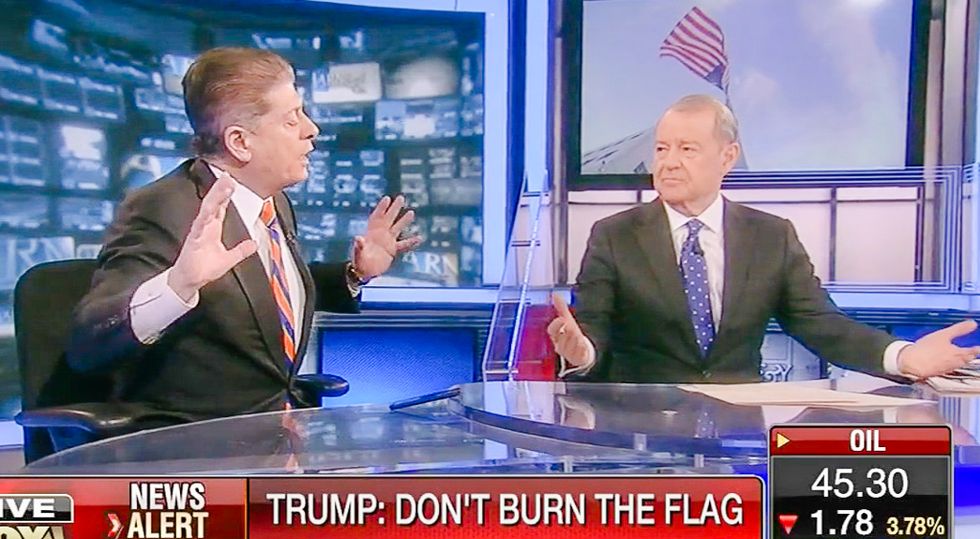 In a tweet on Tuesday, Trump insisted that "[n]obody should be allowed to burn the American flag - if they do, there must be consequences - perhaps loss of citizenship or year in jail!"

Nobody should be allowed to burn the American flag - if they do, there must be consequences - perhaps loss of citizenship or year in jail!
— Donald J. Trump (@Donald J. Trump) 1480420513.0

Appearing on Fox Business later in the morning, Napolitano let out a belly laugh before host Stuart Varney could finish reading Trump's tweet.

"There are two Supreme Court opinions that say I can burn my flag, I can't burn yours," Napolitano explained. "Burning the American flag is a form of protected freedom of speech as reprehensible as it is, as demonstrative of a hatred of American values as it is -- I fully agree with the president elect on that."

"But you cannot prosecute for it," he added. "The reason I chuckled is the penalty of stripping citizenship has been prohibited in the United States of America since 1789!"

"Get a new Supreme Court and get a different ruling," Varney suggested.

"Get a different constitution!" Napolitano shot back. "Rather than the one in which he was elected president."

"Not yet," Varney laughed.