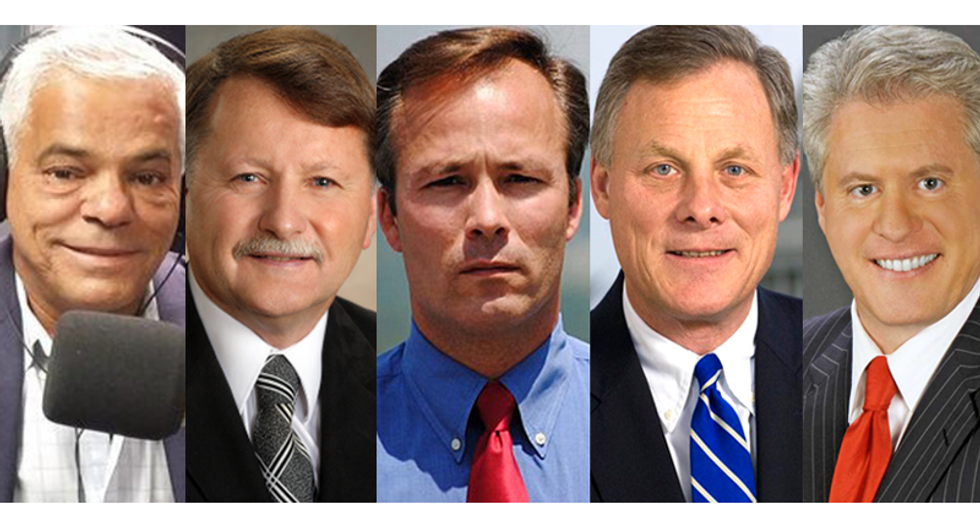 In an election heavy on hyperbole, a number of Republican politicians have been forced to walk back remarks casually calling for the death of Democratic candidate Hillary Clinton. Even Donald Trump himself was forced to clarify his remarks after suggesting there was something “the Second Amendment people” can do if Clinton is elected and given the opportunity to pick Supreme Court judges.

Responding to criticism that Trump was inciting violence against the Democratic nominee with his remark Trump told Sean Hannity he was referencing grassroots organizations who support gun rights. "This is a political movement," Trump said. "This is a strong, powerful movement, the Second Amendment. You know, Hillary wants to take your guns away. She wants to leave you unprotected in your home."

But Trump isn’t the only one who’s made subtle—or explicit—references to Clinton’s death. Here are five other Republican politicians who have low-key called for Hillary Clinton's murder.

The senior U.S. Senator from North Carolina apologized Monday for a joke he made over the weekend suggesting supporters of the National Rights Association should put a “bullseye” on an image of Hillary Clinton.

“Nothing made me feel any better than, I walked to a gun shop, I think, yesterday in Oxford,” Burr said at a get-out-the-vote rally Saturday. “There was a copy of [NRA monthly magazine] Rifleman on the counter. “It’s got a picture of Hillary Clinton on the front of it.”

“I was a little bit shocked at that it didn’t have the bullseye on it,” he quipped.

Democrats quickly condemned Burr for his comment; the Democratic Coalition Against Trump even asked the Secret Service to investigate his remark.

“Thanks to Donald Trump’s place at the top of the ticket, Republicans, namely Senator Richard Burr, believe that they can joke about bullseyes being placed on the back of someone running for the highest office in the country," Democratic Coalition Against Trump Senior Advisor Scott Dworkin said Monday. “We cannot allow this type of rhetoric to continue in our political system—I can only hope it all will end when Trump is defeated next week."

In a statement to the North Carolina newspaper News & Observer, Burr apologized for his comment, calling the joke “inappropriate.”

“It’s Hillary in a White Ford Bronco,” Root said. “She’s got Huma driving, and they’re headed for the Mexican border .. when they make the run for the border of Mexico, there’s nowhere to go, because President Trump has built a big, beautiful wall.”

“We all get our wish: the ending is like Thelma & Louise,” he continued, referencing the ending of the classic 1991 film where the main characters drive off a cliff to avoid capture by law enforcement.

According to Politico, Root’s imagery drew cheers from the crowd of Trump supporters.

On July 20, New Hampshire House of Representatives member Al Baldasaro, who co-chairs Trump’s national veterans coalition, said Hillary Clinton should be “put in the firing line and shot for treason” for how she handled the Benghazi terror attack.

“She is a disgrace,” Baldasaro said of Clinton, listing off the Benghazi terror attacks along with her FBI email probe.

“This whole thing disgusts me,” he continued. “Hillary Clinton should be put in the firing line and shot for treason.”

Later that day, the Secret Service said it was investigating Baldasaro’s claim, releasing a statement that  the agency was "aware of this matter and will conduct the appropriate investigation.”

Despite the Secret Service investigation, Baldasaro later defended his comments, blaming the media for distorting his position. “The liberal media took what I said and went against the law and the Constitution and ran with it, and they said that I wanted her assassinated, which I never did," Baldasaro told MassLive.com in August. "I said I spoke as a veteran, and she should be shot in a firing squad for treason.”

West Virginian House of Delegates member Michael Folk landed in hot water in July after tweeting Hillary Clinton should be "hung on the Mall in Washington, DC.”

CBS reported that Folk, who is also a pilot for United Airlines, posted on Twitter that "Hillary Clinton … should be tried for treason, murder, and crimes against the US Constitution... then hung on the Mall in Washington, DC.”

The tweet drew rebuke from Folk’s employer. "We are appalled by comments advocating harm to any person," airline spokesperson Mary Clark said in a statement. "They do not represent United Airlines and we are looking into the matter further.”

"Not only are Delegate Folk's words concerning, they are disturbing,” WVDP Chair Belinda Biafore told CBS affiliate WOWK. “The mention of hanging and implication of murder should never, ever be acceptable. To think that a person in a leadership position in our state can say these types of things is baffling and should not be tolerated.”

“Folk's actions should deem him as unfit to serve and Speaker Tim Armstead should take action if Folk doesn't resign,” Biafore continued. “It makes me very worrisome for the people of West Virginia that someone who can feel this type of hate and use this type of rhetoric is in any position of power."

Folk responded to the criticism by tweeting, “Sorry, I don’t mince words.” He later called the tweet “hyperbole,” adding he regrets the “tone” of the remark.

Licking, Ohio County Commissioner Duane Flowers was forced to apologize after saying Clinton should be “hanging from a tree” for treason while at a public meeting in July.

I got caught up in an emotional moment,” Flowers said after criticism mounted against the Ohio Commissioner. “She just totally makes my mind want to pop out of my ears. I really can’t believe she’s running for president.”

“I’m convinced 30 years ago, she’d been locked up for life. I truly believe she has become above the law,” he added. “That’s how far our system has fallen.” Flowers also said he thought the conversation was off the record, noting he ”will never again have a casual conversation with a reporter."

Despite initially chalking up the remark to “an emotional moment,” Flowers eventually issued a full-throated apologize for his outburst.

“I truly and sincerely apologize for the statement,” Flowers said in a a statement. “I am embarrassed and regretful for having my name tagged to it. All I can do is ask for your forgiveness.”

In Texas, driverless trucks are set to take over roads

A giant 18-wheel transport truck is barreling down a multi-lane Texas highway, and there is no one behind the wheel.

The futuristic idea may seem surreal, but it is being tested in this vast southern US state, which has become the epicenter of a rapidly developing self-driving vehicle industry.