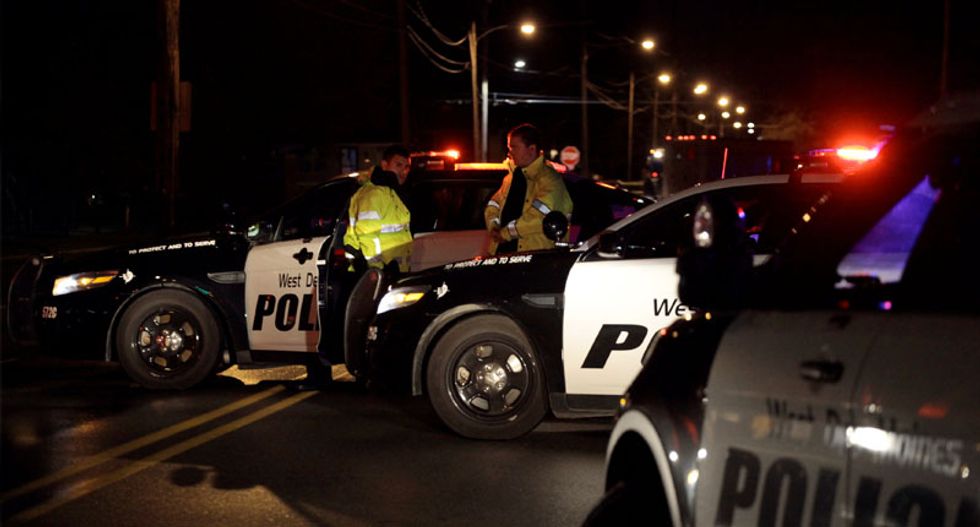 Police in Iowa were searching for a suspect on Wednesday hours after two police officers were killed in separate "ambush-style" shootings as they sat in their squad cars.

Police are searching for a local man named Scott Michael Greene, 46, who should be consider armed and dangerous, TV station KCCI reported. They released a photo showing the suspect, a white man with a light beard, and described him as "armed and dangerous."

"These officers were ambushed," Des Moines police department spokesman Paul Parizek told a news conference, adding that they were shot while sitting in their patrol cars about 2 miles (3 km) apart.

"There is a clear and present danger to police officers right now," he said.

The apparently unprovoked attack comes two years after two New York Police Department officers were shot dead while sitting in their patrol car in Brooklyn, by a man who said he wanted to avenge the deaths of unarmed black men killed by police.

A police cruiser at the site of the Des Moines shooting was riddled with three bullet holes, according to a Reuters witness there.

Police were conducting a manhunt for the suspect or suspects throughout the area, Parizek said.

"An attack on public safety officers is an attack on the public safety of all Iowans," Ben Hammes, a spokesman for Governor Terry Branstand, said in a statement. "We call on Iowans to support our law enforcement officials in bringing this suspect to justice."

Before the shootings in Iowa, 50 police officers had died by gunfire, two accidentally, in the line of duty in the United States this year, according to the Officer Down Memorial Page website.

"To see this pattern that is developing - that's what's unconscionable," said House of Representatives Speaker Paul Ryan during an interview with radio host Hugh Hewitt. "If it's a random, mentally ill person, it's one thing. But it's people consciously going out and doing this.

"We have a lot of work to do in our communities to heal."

Wednesday's shootings come seven months after two Des Moines officers were killed when their vehicle was hit by a wrong-way drunken driver. Another Des Moines police officer died in a motorcycle accident in August.

Officers in Dallas and Baton Rouge, Louisiana, were the targets of deadly ambushes earlier this year after police killed two black men in separate incidents in a Minnesota suburb and Baton Rouge. Philadelphia police officers have been deliberately targeted by a gunman twice this year.