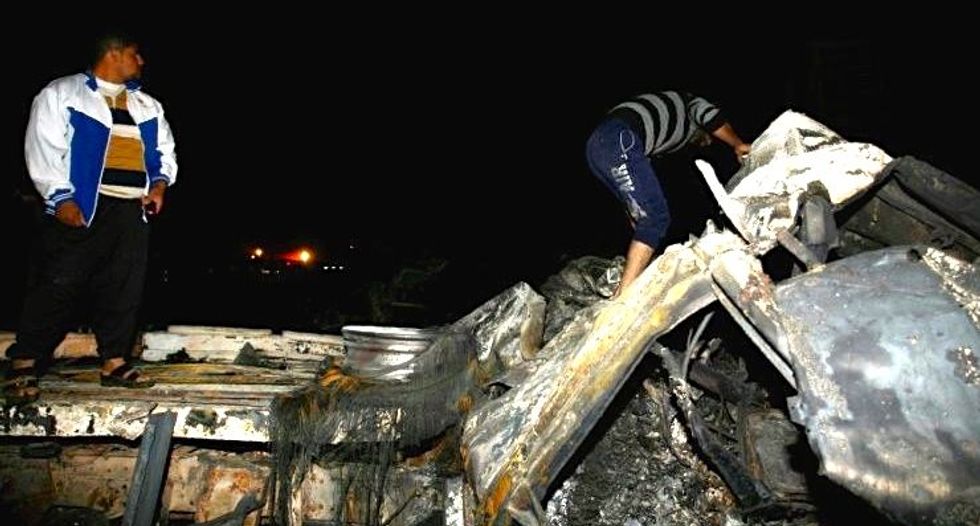 People inspect the wreckage of a vehicle following a suicide bombing that targeted Shiite pilgrims returning from the Arbaeen commemoration in Karbala, on November 24, 2016, in Shomali, about 120 kilometres southeast of Baghdad

The huge truck bomb blast ripped through a petrol station where buses packed with faithful returning from the Arbaeen commemoration in Karbala were parked, officials said.

Most of the victims were Iranians, the largest contingent of foreigners in the pilgrimage, which is one of the world's largest religious events and culminated on Monday.

The attack took place near a village called Shomali, about 120 kilometres (75 miles) southeast of Baghdad.

IS, which is fighting to defend its Mosul stronghold in northern Iraq, claimed responsibility for the attack.

Falah al-Radhi, head of the provincial security committee for Babylon, the province where the bombing happened, said several buses were targeted.

"A large truck exploded among them. It was a suicide attack," he told AFP. "There are at least 70 dead, fewer than 10 are Iraqis, the rest are Iranians."

Videos circulating on social media showed debris scattered over a large area along the main highway linking Baghdad to the main southern port city of Basra.

"There are completely charred corpses at the scene," said Radhi, who added that at least 20 wounded were transferred to nearby hospitals.

The Joint Operations Command in Baghdad issued a statement saying the truck was packed with 500 litres of ammonium nitrate, a chemical compound used in many explosive devices.

Up to 20 million people visited Karbala, home to the mausoleum of Imam Hussein, for Arbaeen this year. According to the Iraqi authorities, around three million of them were Iranians.

Iraq had deployed around 25,000 members of the security forces in and around the shrine city, which lies southwest of Baghdad, to protect the pilgrims from a feared IS attack.

The jihadist group, which is losing ground in Mosul, has carried out a series of high-profile diversionary attacks since Iraqi forces launched a huge offensive against their northern stronghold last month.

Maan al-Saadi, a commander with the Counter-Terrorism Service (CTS), told AFP on the front line in Mosul that his forces were fighting IS in the neighbourhood of Al-Khadraa.

"They cannot flee. They have two choices -- give up or die," he said.

Over the past few days, Iraqi forces have cut off the main supply line running from Mosul to the western border with Syria, where IS still controls the city of Raqa.

The US-led coalition also bombed bridges over the Tigris river that splits Mosul in two, reducing the jihadists' ability to resupply the eastern front.

"The Iraqi advance on the south and southeast of the city has started to pick up some steam," coalition spokesman Colonel John Dorrian said.

"It is extraordinarily tough fighting, just brutal, but there is an inevitability to it. The Iraqis are going to beat them," he told AFP.

IS fighters moving in an intricate network of tunnels have used snipers, booby traps and a seemingly endless supply of suicide car bombers to stop Iraqi forces.

The authorities have not released casualty figures since the start of the offensive but fighters have admitted being surprised by how fierce IS resistance has been.

They are also edging towards the city from a northern front as well as from the south, where they are within striking distance of Mosul airport.

Among the forces deployed south and west of the city are the Hashed al-Shaabi (Popular Mobilisation), an umbrella for paramilitaries dominated by Tehran-backed militias.

They have focused their operations on Tal Afar, a large town still held by IS west of Mosul and on Wednesday announced they had cut the main road between it and Syria.

That will make it very long and dangerous for IS if it attempts to move fighters and equipment between Mosul and Raqa, the last two bastions of their crumbling "state".

The International Organization for Migration said Thursday that around 76,000 people had been displaced since October 17.

A few of them have returned to their homes in retaken areas already but Iraqi forces on Thursday slapped a curfew on neighbourhoods of eastern Mosul under their control.

Security officials told AFP they were banning shops from reopening and preventing residents from returning in order to complete their screening of those who had remained.