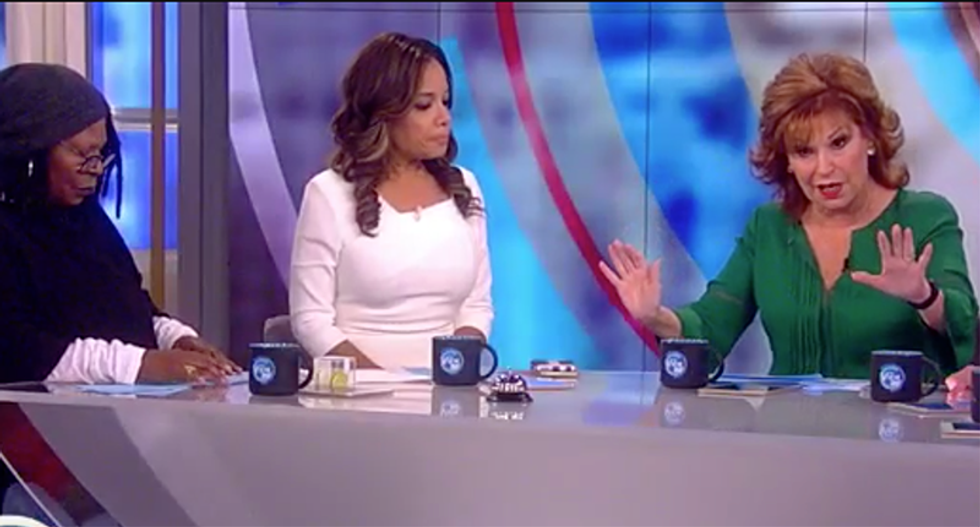 The women of "The View" couldn't understand what was behind the recent announcement from FBI Director James Comey about Hillary Clinton's emails found on Anthony Weiner's computer.

Co-host Whoopi Goldberg couldn't understand why these announcements were coming out now and speculated that there was an ulterior motive.

Sunny Hostin, who worked as an assistant U.S. attorney before being hired by ABC, revealed that many of her former colleagues were shocked by the way that Comey handled this case.

"You can't release information about a pending investigation and certainly not information that could affect an election," Hostin said, citing her years at the Justice Department. "It's clear to me and to other former prosecutors that this is so unprecedented that it's just simply not done. When you're there, you have to sign all of the policies... I can't imagine that the FBI director would do something like this."

She went on to say that she spent the weekend speaking with former prosecutors, citing the open letter from 100 of them, who all agreed the way Comey handled it was wrong. "When I looked at it, there were at least four to five prosecutors that signed it that I worked with personally and that trained me," Hostin confessed. "And it shook me to my core. Because we take this responsibility so seriously as prosecutors. And to have my former colleagues call out the head of the FBI for doing something that was, I'm not going to say it was criminal but it certainly feels like an abuse of office. I'm shocked."

Hostin then fought back and forth with co-host Jedediah Bila, who claimed that Comey was merely keeping Congress informed. "But he doesn't even know what the information is, Jed," Hostin said. But Bila maintained that Comey wasn't saying that Clinton was guilty.

"He's implying guilt," Goldberg said. Bila said she didn't read it like that. "I don't know how you could read it any other way."

Hostin told Bila that there are Department of Justice guidelines that outline what someone is supposed to do in situations like that. "So, that obligation to the United States government to his office certainly supersedes anything else," she said.

Goldberg also called out the double standard when it comes to the George W. Bush administration that reportedly deleted over 22 million emails. "What's good for the gander is good for the goose," Goldberg said.

That's when Behar cut in with her zinger. "I have a question," she began. "Why is it that — maybe I don't know the law that well — but there was no investigation until after the election of fraud at Trump University. That's after the election we're going to hear about that. Then there are these allegations from 11 women about sexual assault. We'll hear about that after the election. Politifact has called Trump the biggest liar of the year. He lies about everything. He has a shady past regarding his foundation—"

"He also has a rape case pending in federal court," Hostin cut in.

"Well, that -- okay. So, these are the things, as an American citizen, why am I only listening about somebody's e-mails?" Behar asked. "Why am I not hearing from the authorities about these cases?"